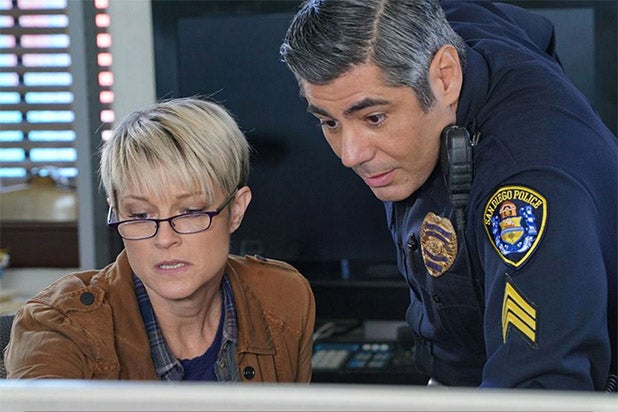 “The Fosters” has never been a show to shy away from getting political, but showrunner Peter Paige says the stakes are higher now than they’ve been in the past.

The Freeform family drama revolves around a lesbian couple and their multi-ethnic family, including several children they’ve adopted through the foster care system. That’s exactly the kind of family that stands to lose a lot in today’s political climate.

“I think on some level, this show is more important than ever,” Paige said in an interview with TheWrap. “For people who might feel kind of ‘other-ized’ by the current political environment. To have a place where they can come, feel seen, and recognize their challenges and stories.”

Tuesday’s Season 4 finale will see the family’s teenage son, still recovering from a traumatic brain injury, reacting to the discovery that his girlfriend had an abortion without telling him. Other family members will fight to keep their school from being privatized. Elsewhere, Callie weighs whether to accept a plea deal or take her chances at trial, all while trying to help a friend out of a bad situation with her pimp.

“All of these stories are escalating into crisis,” Paige said, carefully noting that not every story will be resolved by the end of the episode. “It has some of the most frank and confronting scenes we’ve ever done on the show.”

TheWrap: Your season finale is airing ahead of the “Switched at Birth” series finale tonight, have you given any thought as to how your own show might wrap up one day?
Peter Paige: It’s certainly something we talk about. I don’t think any of us have a real, firm, absolute idea of what it’s going to be. We don’t know. This season could be our last season, there could be a Season 6, we just don’t know.

Do you have an ideal number of seasons in mind?
Look, I love this family. I love being able to explore their issues and challenges, particularly in this political climate. I think on some level, this show is more important than ever. For people who might feel kind of “other-ized” by the current political environment. To have a place where they can come, feel seen, and recognize their challenges and stories. So I want us to stay on the air as long as we’ve got good stories to tell.

Have you found yourself adjusting the show in response to the political climate?
For sure. The timeline of the show is a little challenging to track, but we definitely thought it was important to acknowledge the current situation in the U.S. because it changed so, so enormously on Nov. 8.

Why did you feel that was important for the show to do?
Our family is exactly the kind of family that stands to lose a lot with the current federal government. They’re multi-ethnic, they’re LGBT, they’re being subsidized by the state and federal governments because they’ve got foster kids. So there’s a lot that this family is engaged with that are a lot of the things it seems like this government is trying to do away with.

Getting a little more focused on the finale, how is Jesus going to handle the discovery he made about the baby at the end of last week’s episode?
The poor guy, he’s been through so much. Of all things, what he’s lost really is impulse control. So this is a big, big challenging moment for him. But as of right now, I don’t think he really understands how much he knows or doesn’t know, or understands for sure.

Why didn’t anyone tell him about the abortion?
At first they didn’t know, and the only person who knew was Emma and then Brandon. At the time Jesus was in no state to receive that kind of information. And by the time the moms get wind of the information, things feel really different. The question is “should they be the ones to tell him? Or should it be Emma?” They’re so overwhelmed and overloaded — and they’re also worried about Jesus’ mental state — so while I don’t necessarily agree with it, I understand why they made the choices that they did.

With Callie’s trial date looming, what does the finale have in store for her?
Right at the beginning of the finale, we find out that Callie gets offered a plea deal, unfortunately it’s a bad one. And she’s faced with a terrible decision, whether to take this deal or take her chances at trial, and she has 24-hours to make that decision.

Also Read: 'Beyond' Renewed for Season 2 at Freeform

What’s her state of mind now coming out of that meeting with Kyle last week?
She so wants to believe in everyone’s goodness, and she so wants to fight the good fight that I think it really rattles her to see Kyle and suddenly be doubting that he’s telling her the whole truth. And to be unclear about what she knows and what she’s trying to do. I think she’s feeling pretty humbled and afraid. And with good reason. Unfortunately, the weight of that has her making some questionable decisions.

At the beginning of the season, the moms made everyone agree that there’d be no more secrets. Was that doomed from the start?
I think anytime you’re talking about teenagers, you’re talking about some level of duplicity. That’s just a part of the teenage experience. And when you’ve got five kids that have come through the kind of challenging situations that our kids have, they’re bound to keep more than their average share. And it’s just how kids are wired, they don’t want to get in trouble or hurt people’s feelings, so they keep things to themselves. That’s when things get messy.

What else can you tease about the finale?
It’s a ride. All of these stories are escalating into crisis. It has some of the most frank and confronting scenes we’ve ever done on the show. I don’t want to say in which storyline and what context, but there are a few scenes that had even me thinking “Wow, I can’t believe we’re doing this.” It feels so true and so real, that I’m kind of amazed we’re even being allowed to do it.

“The Fosters” airs Tuesday on Freeform at 8 p.m.

Evolution of Freeform: From '700 Club' to 'Shadowhunters' (Photos)

Launched as Christian Broadcasting Network in 1977, the network has completely transformed itself several times throughout the years

Since its inception in the '70s, the network now known as Freeform has been bought and sold several times, and been re-named even more. With the exception of "The 700 Club," the network today bears little resemblance to its earliest days.