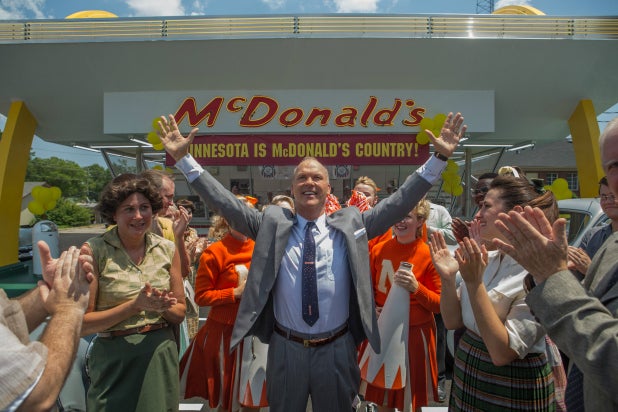 The name on all the restaurants might be “McDonald’s,” but entrepreneur Ray Kroc is the guy responsible for turning a popular California roadside eatery into a global phenomenon. And if he had to completely betray the actual McDonald brothers and restaurant founders to do so, well, that’s just the price of doing business.

This is either the absolute best or absolute worst time to make a biopic about an unprincipled narcissist businessman who takes what he wants, discards his wife to steal someone else’s, and threatens to bury his enemies in court costs, but either way, “The Founder” never steps up to become the biting satire of American capitalism it so begs to be. The film is not here to praise Ray Kroc, but neither is it here to bury him.

We meet Kroc (Michael Keaton) as a salesman of multi-spindle milk-shake machines. Traveling through seemingly every cruddy drive-up restaurant of early-1950s America, he doesn’t find many takers for his device — except in San Bernardino, California, where a place called “McDonald’s” needs eight of them to handle their booming business.

Intrigued, he travels there and meets brothers Dick (Nick Offerman) and Mac (John Carroll Lynch), who have completely reinvented the business with a menu that offers only hamburgers and cheeseburgers (put together in an assembly line Henry Ford would admire), serves the burgers and fries and drinks in disposable paper containers, and delivers its customers quick, consistent meals.

The McDonalds have had bad experiences in the past in their attempt to franchise the business, but Ray insists that their burgers should be available from coast to coast, even mortgaging his own house — without bothering to inform his neglected first wife, Ethel (Laura Dern) — to go into business with the brothers. Ray and Dick spar over everything from Ray’s percentage of the franchises to the idea of scrapping ice cream in the shakes in favor of a powdered version that won’t need costly refrigeration.

Ray loses those fights – until Harry Sonneborn (B.J. Novak) gives him the idea to start owning the land that the franchisees lease for their restaurants. “You’re not in the burger business; you’re in the real-estate business,” Harry tells him, and that clout gives Ray the leverage he needs, to quote a fast-food rival, to have it his way.

Screenwriter Robert D. Siegel (“The Wrestler”) and director John Lee Hancock (“Saving Mr. Banks”) obviously knew that McDonald’s was never going to sign off on this biopic, but they seem afraid to go too deeply into the warts-and-all nature of the story. We see Ray Kroc behave abominably, but Keaton is so naturally magnetic that the film seems to shrug, “Eh? What are ya gonna do?” rather than provide the gut-punch that this saga merits.

It’s telling that the McDonald brothers are the film’s most interesting characters; the filmmakers clearly sympathize with them, and they (and Offerman and Lynch, obviously) make Dick and Mac eccentric and empathetic and, ultimately, tragic. For as much time as Ray spends front and center, however, we don’t really know much about him besides his drive to succeed.

To its credit, “The Founder” is an all-too-rare 1950s movie where not all of the cars gleam like they just left the showroom; even at the new McDonald’s locations, there’s occasionally some trash in the parking lot. But the relentless shiny cleanliness of the era’s “respectable” institutions winds up being another juicy satirical target that the movie never cares to approach.