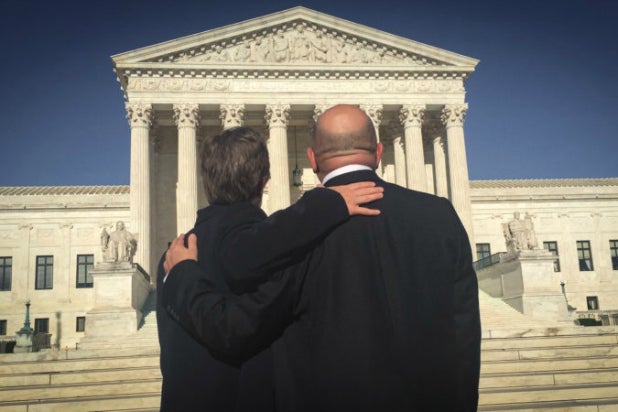 Eddie Rosenstein’s documentary “The Freedom to Marry” can be seen as a feel-good movie for a feel-bad time. It documents the struggle for gay people to marry as viewed mainly through the story of Evan Wolfson, an attorney who has made marriage equality his life’s work.

This is a glib film that moves very fast through time — and it begins badly — but, as they say, it gets better. Or somewhat better.

“The Freedom to Marry” was actually the title of the organization that Wolfson founded to advance marriage equality. We see him at his office in 2015 during the countdown to a crucial case in front of the Supreme Court, speaking of fighting for the “dignity” of gay Americans. A poster hangs on the wall of his office with Wolfson’s face and the word “Engage” underneath, mimicking the style of the “Hope” poster of Barack Obama by Shepard Fairey.

Rosenstein offers a hectic run-down of Wolfson’s youth interspersed with footage from the 1967 Mike Wallace report “The Homosexuals,” which was a first effort by the American media to come to terms with gay people. There is an all-too-brief mention of attempts made by gays to marry in the 1970s — followed by a particularly unfortunate moment in which a shot of a waving drag queen and a more gender-queer male wearing a cone bra are splashed across the screen while a voice over tells us that straight people thought gays were “terrible.”

It becomes clear at this point that “The Freedom to Marry” is tacitly about the need to hide the existence of more radical gay people, even though it was mainly a group of drag queens who started the Stonewall uprising. In order to win the fight for marriage equality, only one face of gay identity can be put forward.

This thorny question of identity is particularly present in the depiction of Marc Solomon, Wolfson’s right-hand man. Solomon’s family was shocked when he came out as gay. There is footage of the sports-loving Solomon watching football on TV with his father, who says, “He can throw a football 50 yards… whatever in the hell that means.” The mixture of conservative pride and liberal perplexity in that statement is fascinating, and it gets to the root of just how radical gayness is, no matter how you try to package it for heterosexual people.

The other major player here is Mary Bonauto, a lawyer who is arguing the 2015 case in front of the Supreme Court on behalf of April DeBoer and Jayne Rowse, a committed lesbian couple who had adopted children with special needs. Only one of the women was allowed to legally adopt their kids, and so Bonauto was charged with showing the court the unfairness of this.

The rich irony here is that Bonauto’s case for DeBoer and Rowse boiled down to, “What about the children?” And of course this plea has long been a favorite weapon for anti-gay people. What’s even more ironic is that the leaders of the movement against gay marriage in this movie look very much like a freak show nightmare from a religious conservative angle, as if they are the inverse of their own fears about those radical gay people that Wolfson and his allies need to minimize or hide from view.

Wolfson says in “The Freedom to Marry” that his main tactic for winning marriage equality was to make heterosexual people see “how we are like you” — which means having to conceal the ways that gay people are not like straight people, and what has resulted can be seen as a new kind of closeting. But these difficult issues are offset, at times, by Wolfson’s obvious warmth and his need to be a “mensch,” especially in a scene where he has a diner breakfast with Bonauto and gazes at her with consideration and with love. At a moment like this, they look like two very decent people fighting a good fight together.

“The Freedom to Marry” is a movie that discourages complex thinking or contradiction, but there are little hints here and there of something more frightening and unstable, such as a scene at an anti-gay marriage rally in Texas where a bigoted man tells a mother of two sons, one straight and one gay, that she must have done something wrong to “pervert” the gay one.

The opposition to gay marriage looks so thoroughly repulsive and foolish that our expected sympathies finally do have to fall into line, even if there is probably an old Henny Youngman joke somewhere about how “freedom” and “marriage” are antithetical terms. Let’s hope that current circumstances won’t create the need for a downbeat sequel to this film.