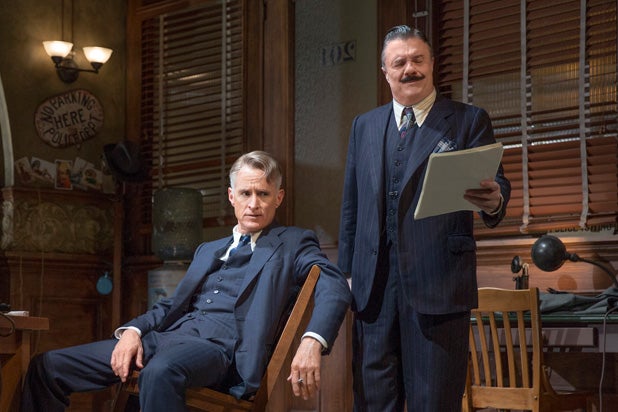 Most American dramas from the era have been forgotten, but Ben Hecht and Charles MacArthur’s 1928 press-room comedy “The Front Page” continues to wow audiences. As the new starry revival that opened Thursday at the Broadhurst Theatre in New York occasionally proves, Hecht and MacArthur not only knew how to write a basketful of deplorables. They also forced us to identify with corrupt politicians and tabloid newspaper reporters, whose banter on the of a hanging — a suspected Communist has shot a black cop — is about as racist, sexist and homophobic as it gets. At least it was in the 1928 version of the play.

The raucous crowd at the Criminal Courts Building in Chicago has been sanitized a bit from the original. Gone are a least a half dozen utterances of the N-word, replaced with “coloreds.” Somehow it’s no longer enough, like it or not, to identify with characters’ flaws. In 2016, audiences must sympathize. Which is something Hecht and MacArthur nr intended. They describe their characters as having “small respect for themselves or each other as husbands, fathers and lovers.”

More damning is what they had to say about the top newspaper editor Walter Burns: “a devil with neither point nor purpose to him — an undignified devil hatched for a bourgeois Halloween.”

Even without the N-word, Nathan Lane manages to deliver a truly evil, unlovable Burns, who, of course, is always a delight to watch. But again, some uncredited writer got in the way of his portrayal, reworking the original text. Knowing that the devil always gets the best lines, Hecht and MacArthur also had the stage savvy to give Burns a delayed grand entrance. He doesn’t show up until halfway through act two! Even Puccini didn’t withhold Turandot’s “Un questa reggia” that long. 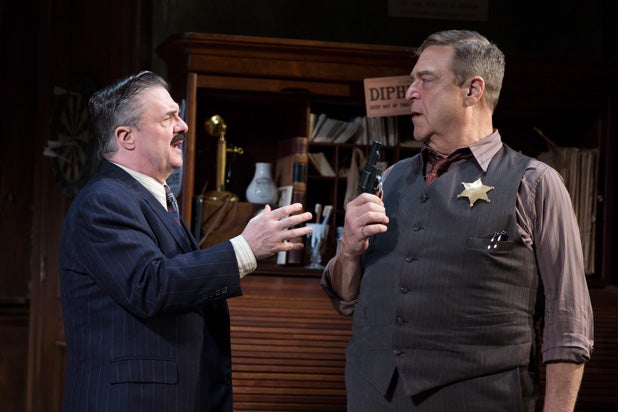 Unfortunately, the 2016 “Front Page” muffs Lane’s long-awaited entrance by projecting the actor’s voice before he appears in the flesh, simulating phone conversations with his star reporter, Hildy Johnson. It’s not great off-stage wordplay, which may be why no one takes credit for it in the Playbill. There’s also the newly added and very anachronistic “I can pull better newspaper stories out of my ass than you can write!” The 1920s might have been roaring but they were nr so anally fixated. In the original, Hildy tells off Burns with the nasal “I can blow better newspaper stories out of my nose than you can write!”

Director Jack O’Brien begins and ends each act with a tableau. Until Lane arrives, the action in between those stylish freezes rarely unthaws. The direction is stately when it needs to be raucous. Likewise, Douglas W. Schmidt’s set is grand, not grungy enough to be a press room in a prison. Occasionally, a few supporting players break through. Robert Morse in the cameo of a boozed-up messenger emerges as lower than the worn linoleum. Playing a prostitute with a heart of brass, Sherie Rene Scott goes period with an uncanny Joan Crawford impersonation, right out of “.” Jefferson Mays, once again, recycles Franklin Pangborn, playing a persnickety poem-writing (wink, wink) reporter. Oddly enough, Mays received a big ovation at his entrance. Were people applauding his recent “Oslo” triumph, or did they think Lane was reprising his performance from “The Nance”? From a few rows away, the two men look a lot alike.

But what’s “The Front Page” without a dynamite Hildy Johnson? John Slattery‘s hedonistic “Mad Men” boss was always that show’s greatest comic asset, but he shows none of that flair, timing, or panache here. He’s Madison Avenue when he should be punch drunk on impossible deadlines for front-page stories that will be tomorrow’s kitty litter. When we first see him, he carries a cane given to him by his fiancee. Later, he breaks the cane in disgust. He looks better with the cane.

Producer Scott Rudin brought back the rat-a-tat-tat pace of typewriters and post-curtain call deadlines by having critics review the opening night performance of this “Front Page.” Did it deliver a more glamorous and exciting premiere? I’d always heard stories from old timers that the tradition made for schizophrenic openers. The critics didn’t laugh or applaud, while all the investors and friends of the producers whooped it up to fool the critics into thinking they were watching a big hit. On Thursday night at the Broadhurst, that schism was on display, although it was nice to see the critics eschew their usual jeans, sneakers, and baseball caps. Well, some of them dressed up.

The experience did teach me one thing. I now know why plays used to be written in three acts: The critics wrote their reviews during the intermissions. If that’s the way producers want their multi-million-dollar shows to be reviewed, so be it. One thing Brooks Atkinson and other golden-age critics experienced is filing their review on a laptop at the Sardi’s opening night party, across the street from the Broadhurst. It had the closest internet connection.