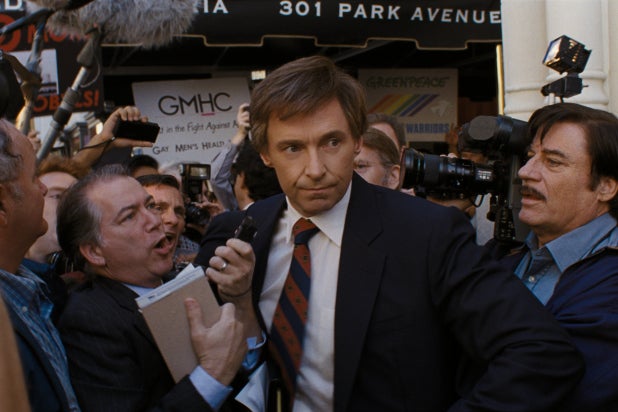 To dramatize the scandal-ridden ups and downs of the current presidential administration is to consider all manner of genres: Python-esque satire, journalism drama, social-issue tragedy, gilded ’80s-style sex thriller, even dystopian mind-screw. Is it even possible to tell the story of a rise and fall like Gary Hart’s — smart politician felled by a combination of personal arrogance and journalistically exploited national prurience — without the whole thing seeming morally quaint, like storybook time during a home invasion?

The answer is no, albeit an entertaining no, if the example is Jason Reitman’s “The Front Runner,” his self-consciously on-point, briskly enjoyable version of the three weeks in 1988 that took the Colorado senator from shoo-in for the Democratic presidential nomination to ousted cautionary tale after allegations surfaced regarding his extramarital affair with Donna Rice. The film’s assets are like an attractive party platform for discerning moviegoers: wonderful actors (Hugh Jackman, Vera Farmiga, J.K. Simmons), crisp dialogue, and agreeable suspense regarding its thriller elements and emotional hand-wringing.

So why does the overall package, adapted from political reporter Matt Bai’s non-fiction book “All The Truth Is Out,” stop short of feeling like a necessary slice of turning-point history, and more like something you think “nice job” about? Perhaps because in giving the jump-around view — introducing us to not just Hart (Jackman) and family, but campaign staff, and reporters from a handful of newspapers — the effect is of a scandal skimmed, rather than explored.

Opening with the 1984 campaign that first gave voters a taste of Hart’s fiery idealism (“the world changes when young people give a damn”), Reitman simultaneously promises an Altman-like tapestry, offering a focus-shifting, layered-sound long shot that dips in on various wisecracking Hart staffers at the Democratic convention that year. When we pick up the story four years later, and Hart’s primary season bid is stronger and more strongly covered, the tension inside the campaign between Hart and his manager, Bill Dixon (Simmons), is between an intellectual candidate who doesn’t understand why hair, personality, and barbecues are important, and an exasperated handler who knows fully well that great ideas aren’t enough anymore in the TV age.

Hart, whose relationship with his smart wife Lee (Farmiga) has an air of professional warmth, is comfortable trading barbs and hashing out policy and high-minded ideas with the press; he even gives one feature Washington Post reporter (Mamoudou Athie, “Patti Cake$”) a Tolstoy novel. But when Miami Herald reporter Thomas Fiedler (Steve Zissis, “Togetherness”) receives a tip about possible Hart infidelity, he ignores decades of unwritten Fourth Estate courtesy about the private lives of public figures — what kept Kennedy’s womanizing, among countless others’, out of the papers — and stakes out Hart’s DC home. The resulting expose of clandestine activity put character front and center, controversially and irrevocably.

The movie’s DNA is a mix of “The Candidate” and “All the President’s Men,” as evidenced by the nostalgic grain in Eric Steelberg’s cinematography, and editor Stefan Grube’s focus on performance rhythms over story flash. But those earlier bellwether films had sturdier, more focused points of view. (In each case, they belonged to Robert Redford’s learning-on-the-job character.) “The Front Runner” is entirely theme-driven, and wants to touch on everything about the Hart story: reporter-editor huddles about press responsibility (at two different papers, no less, including Alfred Molina as Washington Post editor Ben Bradlee), inside-campaign strategies to fight tabloidization (well-acted by the young supporting cast), and a marriage’s fractures (in which Farmiga’s reactions are expectedly powerful). Yet what gets lost in Reitman’s efficient patchworking is an abiding dimensionality.

It leaves some strange gaps amidst the Greek chorus of witty exchanges and pressurized confabs, amusingly delivered by Chris Coy (“The Deuce”), Alex Karpovsky (“Girls”), and Josh Brener (“Silicon Valley”) as the core of Hart’s crew. On the one hand, there’s a welcome female-centric subplot in which young campaign scheduler Irene (Molly Ephraim, “Last Man Standing”) and a scared Rice (nicely turned by Sara Paxton, “Murder in the First”) come to terms with how society’s retrograde view of women defines their roles at that moment: appointed babysitter and assumed floozie, respectively. But why, then, does the portrayal of Hart — whose ego is magnetically captured by Jackman — stop at the door to that brownstone?

Bai, who’s credited as co-screenwriter with Jay Carson (“House of Cards”) and Reitman, famously left the question of confirmed marital infidelity out of his book, too. But by the time “The Front Runner” draws understandably time-stopping suspense out of the galvanizing press conference in which Hart is asked about it point-blank, the movie’s central figure lives for us in some weird limbo between lead character and feature player. It’s hard to tell if we’re supposed to bemoan the question, want it, cringe at it, and conversely, whether Hart should answer it, decry it, etc, etc.

Maybe that’s the point, to leave us confused as to whether the new era of the personal in politics is a good thing or a bad thing. But that doesn’t necessarily help illuminate a story that, while momentous for our electoral future, was ultimately lived by people and not by barbed mouthpieces.