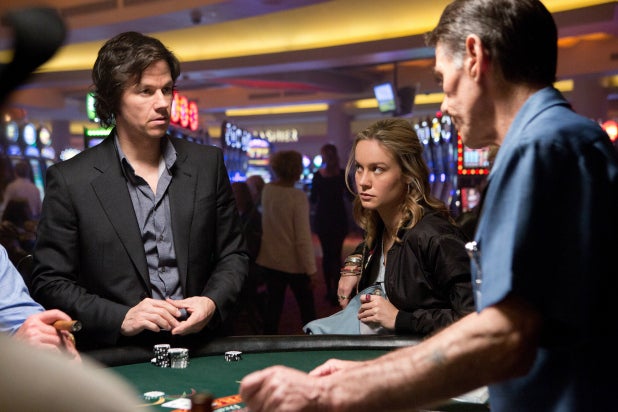 Watching either version of “The Gambler” is akin to witnessing a man slowly sinking into the pit of quicksand in which he voluntarily stepped; it’s even worse, really, since that same man willfully tosses aside any ropes that might save him from his predicament.

But while James Caan in the 1974 version offered a kind of existentialist bravado, Mark Wahlberg comes off as more of an entitled jerk. Bratty and self-destructive make for a bad combination, and it’s what we get from the title character this time around.

This new “Gambler” will no doubt be enjoyed more by those who never saw the original, written by James Toback and directed by Karel Reisz, and not just because the first movie’s journey from New York to Vegas has now been downsized to a day-trip from L.A. to the Morongo Casino. Hollywood of four decades ago was more willing to bum out its audiences, to plunge into the depths of humanity without offering up any kind of respite; in 2014, neither casinos nor studio movies are what they used to be.

Wahlberg stars as Jim Bennett, who bailed on literature after one novel and now teaches at an unnamed Los Angeles college. He comes from a wealthy background; grandpa (George Kennedy) was a banking magnate who dies in the first scene, leaving Jim nothing, while mom Roberta (Jessica Lange) manages the purse strings. Early on, we see Jim attend an underground gambling party where he loses money, borrows more, and loses that too, all in front of one of his students, Amy (Brie Larson), who’s a cater-waitress.

Already in debt to Korean mobsters and to loanshark Neville (Michael K. Williams, “The Wire”), Jim hits up the foreboding Frank (John Goodman, at his most intimidating) for money, but Frank sees Jim for the bad risk that he is. (In one of many on-the-nose lines of dialogue in William Monahan’s script, Amy later observes about Jim, “You’re one of those guys who started out with no problems at all, and now you have all of them.”)

There can be fascination in watching a downward spiral, but as written here by Monahan (“The Departed”) and directed by Rupert Wyatt (“Rise of the Planet of the Apes”), Jim comes off as a spoiled whiner who deserves not only the punishment the film heaps upon him but also a few extra helpings.

Wahlberg, to his credit, does make a believable college professor, complete with glasses and discussions of Shakespeare and Camus, even if some of his bounding-into-the-audience mannerisms lead to “The Mirror Has Two Faces” levels of incredulity. At the same time, he has a disconcerting habit here of talking faster as a way to convey a variety of emotions, from impatience to disappointment to intellectual rationalizations. Wahlberg’s a fine actor, one who’s equally magnetic as hero or heel, but his work in “The Gambler” counts as one of his occasional miscalculations.

What Wahlberg fails to accomplish is to make us interested in Jim’s plight and his addiction; it was one thing for Wahlberg to shrink back and allow the larger-than-life supporting characters of “The Fighter” to take center stage, but this is a case where it’s on him to give us someone in whom we can be invested, even if that investment leads to loathing or pity. (His performance doesn’t just pale emotionally against Caan’s, but visually as well: Wyatt reenacts the earlier film’s iconic upward shot of the character framed by the casino ceiling, but this time around, it doesn’t pop.)

Once again, however, Wahlberg finds himself surrounded by a top-flight cadre of actors, with Lange and Goodman getting some of their meatiest film roles in ages, and Williams commanding the screen in a way that the movies have rarely offered him before now.

Also read: Will Ferrell and Mark Wahlberg Will Compete For Kids’ Affection in ‘Daddy’s Home’

Wyatt and cinematographer Greig Fraser (“Zero Dark Thirty”) get a great deal of mileage from their L.A. locations, from the hills to the desert to downtown, with a mud-slide dream sequence thrown in for good measure. The director also makes the blackjack sequences so tense and exciting that you wish that same level of engagement spilled over to the rest of the movie.

Composers Jon Brion and Theo Green offer up a score that’s both chilling and propulsive, but music supervisor Clint Bennett could have eased up on obvious choices like “Money” and “Creep,” even though we’re getting cover versions.

And a cover version is pretty much what this do-over of “The Gambler” represents, with the rougher edges mixed out and sweetened. It’s no mystery why actors and directors want to relive the magic of American studio movies from the fabled 1970s, but if you’re not going to take the risks that the originals did, or illuminate as much about the characters, why redo them at all?