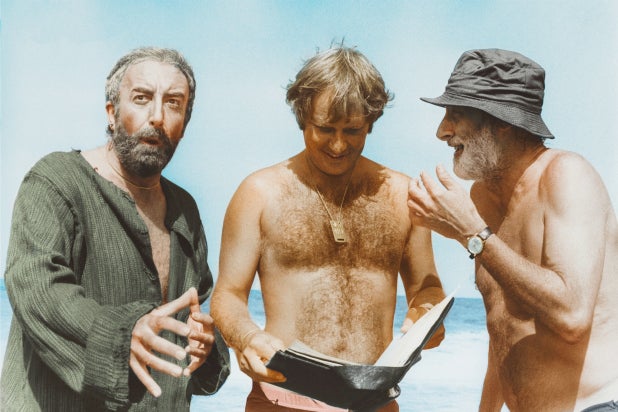 Peter Medak’s new documentary “The Ghost of Peter Sellers,” about the catastrophic production of the actor’s failed 1973 pirate comedy “Ghost in the Noonday Sun,” begins with a little back-patting.

Medak, who also directed the classic films “The Ruling Class” and “The Changeling,” says he’s fairly certain that no filmmaker has ever made a movie about the making of his own movie before. “It’s incredible,” he remarks. And also “completely insane.”

That statement isn’t strictly true. Richard Rush made a documentary about his Oscar-nominated drama “The Stunt Man” called “The Sinister Saga of Making ‘The Stunt Man,'” and Richard Stanley catalogued his catastrophic production of “The Island of Dr. Moreau” (which was eventually finished by John Frankenheimer) in “Lost Soul: The Doomed Journey of Richard Stanley’s ‘Island of Dr. Moreau.'” But it’s always intriguing, regardless, to look back at what was, what could have been, and how cinematic artists feel about their work decades later.

Medak’s “The Ghost of Peter Sellers” is an odd case, however. It’s a film about a film that nobody remembers, and which didn’t even get released for more than a decade. “Ghost in the Noonday Sun” stars Sellers as Dick Scratcher, a lowly pirate who kills his captain, assumes command of the ship but cannot find the old captain’s buried treasure. Eventually he stumbles across a boy who can allegedly see ghosts, who might be able to contact the dead captain and ask for directions.

It’s not a great story, and by all accounts it’s not a great movie. “The Ghost of Peter Sellers” isn’t a tragic film about a film that could have been a masterpiece; it’s an autopsy of a production gone horribly wrong from the outset. The budget was low, the script wasn’t ready and Sellers — then the biggest comedy star in the world — was in a difficult, depressive state after breaking up with his girlfriend Liza Minnelli, doing everything in his power to delay and even cancel the production.

One of the most interesting moments in “The Ghost of Peter Sellers” is when Medak commiserates with other filmmakers who worked with the beloved movie star, and how impossible he was to work with on films like “Casino Royale” and “The Fiendish Plot of Dr. Fu Manchu.”

It’s not quite character assassination: Sellers was known for being a controlling presence on his sets, and the directors are to this day in awe of his talent. Sellers was doing what he thought was necessary to make a good movie. He just didn’t seem to give a damn about what anybody else thought.

A little, but not nearly enough, attention gets paid to what Sellers himself was going through. Interviews with family members and assistants paint the picture of a man who lost himself within characters and probably suffered from an undiagnosed mental illness. There’s an argument to be made that the entertainment industry took advantage of an unstable individual like Sellers, whose personality traits, for better and worse, made him a major box-office draw.

The discovery of behind-the-scenes letters from his producers, accusing him of incompetence and conspiring to undermine his authority on set, appears to give Medak a sense of relief. At least, he can finally say to himself, “Ghost in the Noonday Sun” wasn’t entirely his fault.

And sure enough, the production of “Ghost” was by all rights a total, miserable nightmare. The expensive pirate ship they built sank on the first day, before filming began. The producers were fired after the first week. Disrespected local extras stole costumes, which had to be purchased back from them at local bazaars. Sellers faked a heart attack just to get a few days off work, and even re-created a scene from his comedy “I’m All Right, Jack,” by forming an impromptu union among the crew, just to vote no confidence in Medak.

“I mean, I want to kill people,” Medak says, in understandable frustration. “But they’re all dead.”

“The Ghost of Peter Sellers” seems to have been cathartic for Medak, who says that making fiction gives him control over the anxieties that plague him. So making this documentary, and completely reframing the story of his failure probably helped him move on from all these unhappy memories. The question is, what are the rest of us supposed to get out of it? And that’s a question “The Ghost of Peter Sellers” has trouble answering.

It’s an amusing collection of tragicomic anecdotes, but the collective contemporary disinterest in “Ghost in the Noonday Sun” robs those tales of much needed relevance. The documentary doesn’t illuminate much about Sellers, and certainly doesn’t go far enough in explaining his genius, his frailties, or even the real, human reason why he was so insufferable in person.

It has little to say about the industry, other than that sometimes it stinks. It doesn’t even seem like the failure of “Ghost” had a big impact on Medak’s career, since he went on to direct dozens of productions, movies and television alike, some of which went on to great acclaim.

“The Ghost of Peter Sellers” is a movie that seems to have been made by Medak, for Medak. It’s a mildly interesting footnote in cinema history, and worth watching for Sellers fans, Medak fans and aficionados of obscure cinema (you know who you are).