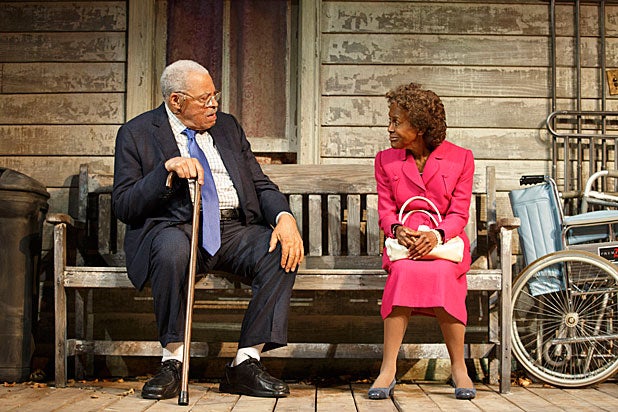 Cicely Tyson doesn’t let her approaching 91st birthday get in the way of being downright girlish on stage. She achieves this marvel twice in the new Broadway revival of “The Gin Game,” which opened Wednesday at the Golden Theatre.

She evokes youthful giddiness at beating the pants of James Earl Jones‘s card-playing veteran in the first act. Later, when she may be falling in love with him, their hands accidentally touch and then they dance. Tyson suddenly has the glow and all of the stability of an adolescent.

Jones is one of the busiest octogenarian actors in Broadway history, clocking in no fewer than six lead performances in as many productions in the last decade. In last season’s “You Can’t Take It With You,” he kept the comedy afloat, like a big balloon pumped up on the helium of his great basso.

His immense build, especially in comparison to the petite Tyson, is again on display in “The Gin Game,” but to poignant effect. His character rages at all that power being trapped in an old body that no longer works the way he wants it to.

It’s not always easy to see exactly what a director brings to a two-hander like D. L. Coburn’s “The Gin Game.” They rarely are cited for season-end awards, since helmers of larger ensembles tend to be honored. In the case of “The Gin Game,” did Leonard Foglia just stay out of the way and let two pros go at it? Whatever, it works.

What doesn’t work (except as an excuse to watch two pros go at it) is Coburn’s play, which won the Pulitzer Prize in 1978. Since Tyson’s continual winning at cards can’t sustain one act, much less two, Coburn introduces some family conflicts that are more forced than a reality TV script.

Oh, and when Tyson finally gets to deliver a big F-bomb near the end, the explosion rocks the house. It’s that kind of play about old age.