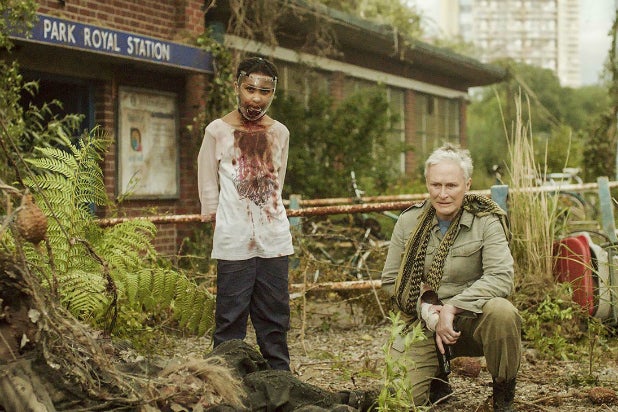 Like the vampire phenomenon before it, the zombie wave rose and crested, crashed and ebbed. The film industry took to it with dollar signs in its eyes and did what any proper horde of undead would do: they consumed all but the bones and gristle before leaving the genre to television’s ongoing custody. And into this post-opportunistic landscape wanders “Girl with All the Gifts.”

Based on M.R. Carey’s novel, “Girl” marries well-worn YA tropes to brain-eating gore, and the result is, happily and occasionally quite grimly, more than the sum of those parts. In this case, the possibility of salvation in a dystopian future — thanks to the talents and leadership skills of one special tween — is compromised by the fact that the title’s gifted girl is a zombie.

Not that the movie ever uses the Z-word. Melanie (newcomer Sennia Nanua) is a “Hungry,” one of countless victims of a fungal infection that has wiped out most of the world’s human population and turned them into roving, screeching cannibals. They’re covered in grime and lesions, and they sleepwalk their after-lives away until startled by the smell of human saliva. That’s when they chase, subdue and feast.

But Melanie is not quite like the others. Able to speak and learn, she’s whip-smart and charming, loyal and kind, though those traits matter little to most of her keepers in an official military compound. Their job, day in and day out, is to strap her to a chair and train rifles at her head, just in case she turns feral. Her only human connections are to Dr. Caldwell (Glenn Close), whose interest in Melanie extends exclusively to studying the child’s behavior and, eventually, experimenting on her to synthesize a cure for the infection, and teacher Helen (Gemma Arterton), who sees Melanie for the near-human she is. Together, Helen and Melanie forge a special bond, surrogate mother and occasionally monstrous child.

When a huge band of Hungries attacks the compound, Melanie, Caldwell and Helen escape alongside a military commander (Paddy Considine) and a friendly guard (Fisayo Akinade, “Cucumber”). Into the nearby green they go, laying low but never safe, everyone’s survival in the hands of a child who understands the world from the perspective of both predator and prey, human and not-quite-human. There are second-act surprises in store, of course, and they won’t be divulged here, but they’re genuinely fresh, part of the reason this addition to an overdone genre merits attention.

Also Read: 'Get Out' Races to $10.8 Million Lead at Friday Box Office

Director Colm McCarthy (“Peaky Blinders”) alongside screenwriter Carey, adapting his own novel, feel like genuine collaborators, the script and direction prioritizing deep characterizations — not always guaranteed in the world of zombie movies — and a sense of genuine care and empathy. Simon Dennis’s melancholy camerawork creeps around the survivors whether they’re in Brutalist bunkers, the darkness of the English woods or desolate suburban sprawl.

Arterton and Nanua are a perfectly symbiotic team, and their characters’ relationship is as familial and moving as the circumstances allow. Arterton’s career unfortunately tends to involve either under-appreciated work in little-seen films like “Tamara Drewe” or corporately engineered “blockbusters” that never were (“Prince of Persia,” “Hansel & Gretel: Witch Hunters”), but here she’s the sensitive, motherly ballast for Nanua. This gives Close the chance to run around the outside and steal all her scenes as the blunt scientist, who can look the adorable Nanua square in the face without emotion and remind everyone around her that “it only presents as a child.”

The doctor has a point. The film never skimps on the eating of brains and guts, as puddles of fresh blood are greedily lapped up by hungry Hungries, and it doesn’t soft-pedal Melanie’s own predicament. Nanua’s best moment involves fending off her protectors from a band of famished zombie kids. She’s scared, and it shows, but she’s also willing to crush a few child skulls to get the larger point across. Meanwhile, she spends a good portion of the film covered in viscera, her face and shirt smeared a clumpy red as though she were a normal little girl who simply binged on too many jelly donuts. It’s a mark of the film’s worried worldview that this only makes the child seem more in need of parental protection.

If zombies are a cultural response to the shared fear of humankind’s worst tendencies toward self-destruction — a theme non-zombie cinema will probably explore pretty extensively in the next four years — and if narratives of the living dead need hopeful resolutions to send audiences home a little less afraid of the future, then “Girl with All the Gifts” offers an unsettling departure from cliché. As Melanie’s position in the story becomes more worrisome and uncertain, her survival becomes more vitally important (to her, anyway).

In other words, “Girl” might be the most inadvertently appropriate analog to life in 2017’s increasingly unstable world, by suggesting that it may very well become necessary to co-exist with ongoing terror, especially if the only other option is walking directly into the path of a flesh-eating pack.