In the past decade, Broadway has been kind to Tennessee Williams’ estate — but not his genius.

In almost each season, there’s been another high-profile but deeply compromised revival of “Cat on a Hot Tin Roof” (Scarlett Johansson among the Maggies) or “A Streetcar Named Desire” (Blair Underwood among the Stanleys), with a 2005 “Glass Menagerie” starring Jessica Lange that nearly derailed in previews when Christian Slater was brought in as a last-minute replacement to play Tom.

Theatergoers have to go back to the Royal National Theater’s 1999 staging of Williams’ early, minor drama “Not About Nightingales” to find the playwright well served.

Fortunately, Williams has once again aligned with the ideal cast and creative team, in John Tiffany’s staging of “The Glass Menagerie,” an American Repertory Theater production starring Cherry Jones and Zachary Quinto that previously played Harvard and opened Thursday night at the Booth Theater.

There’s much to praise here, but the major revelation is Quinto, who presents a Tom (Tennessee’s real first name) who can, and does, go mano-a-mano with his near-monster of a mother, Amanda, played by Jones. 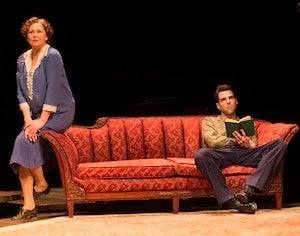 Actually, he almost knocks Mom out. Almost. Because he loves Amanda, Quinto’s Tom doesn’t go all the way, but he has the intelligence and wit, which she woefully lacks, to hurl her over designer Bob Crowley’s vertiginous fire escape if he so chooses.

Instead, he simply leaves their godforsaken apartment at play’s end, as he must. Why? Jones makes it clear by providing in her Amanda the missing link between Eleanor Roosevelt and Margaret Dumont. Imagine that woman for a mother.

These are two big, flamboyant performances. Tom warns us in the play’s first minutes that this isn’t life but rather memory, and like all things remembered, there’s a sense of exaggeration. Watching Jones and Quinto in those opening moments can be bracing, maybe even off-putting, but their many confrontations never fail to explode. Frankly, they’re at each other’s jugular right from the get-go.

The way Jones hurls around the word “ashamed” and Quinto talks about being treated with “suspicious hostility” at work, there’s no doubt about this Tom’s sexual orientation or what he’s been doing at two in the morning when he’s supposed to be at the movies.

Against these two oversized performances, Tiffany effectively pushes Celia Keenan-Bolger to the other extreme as Tom’s physically and emotionally challenged sister, Laura. She’s a whisper and wisp of gossamer fabric, and we often expect her simply to slip away into Crowley’s stunning pool of black water that surrounds the Wingfield apartment.

Instead, Tiffany has her enter and exit through the cushions of the living room sofa. Early in the play, Quinto throws himself into reverse as if caught in a malfunctioning movie projector, and later Natasha Katz’s lighting traps Jones in the time warp of Amanda’s own distorted memory.

Into all this surreality Tiffany drops Brian J. Smith, who gives the evening’s one “realistic” (Tom’s word) performance despite carrying its most enigmatic name, the Gentleman Caller. Smith more than holds his own, turning the man who’s supposed to rescue the fragile Laura from her glass menagerie and instead offers up his own surprising collection of insecurities.

In many ways, this is an eccentric “Menagerie,” which is why Tennessee himself would have loved it.