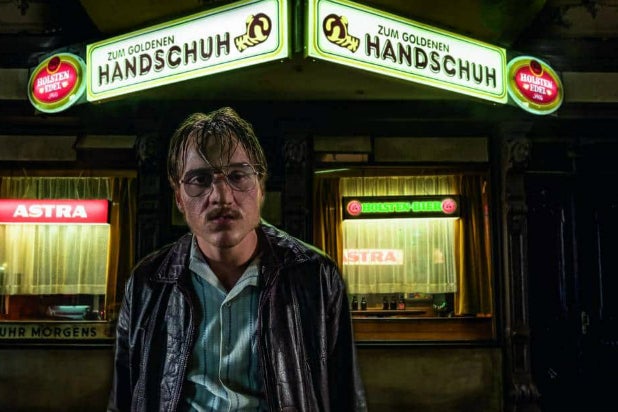 After reaching a career high with the gripping “In the Fade,” which won Best Actress laurels for Diane Krueger at Cannes as well as the Golden Globe for Best Foreign Language Film, Fatih Akin regresses considerably with “The Golden Glove.”

His latest is yet another in a long line of serial-killer dramas under the impression that it needs to be as ugly as its subject in order to be authentic, ultimately serving as further proof that verisimilitude isn’t a virtue in and of itself. In attempting to tell the story of notorious German murderer Fritz Honka, the film inadvertently succeeds in affirming that some things are better left to the imagination.

Honka’s exploits were infamous among those who frequented Hamburg’s red-light district in the ’70s, though he himself remained unknown until after the bodies of four prostitutes were discovered in his attic apartment. Neither Akin nor star Jonas Dassler (“Never Look Away”) make much of an attempt to humanize their subject, content instead to portray him as the outcast-turned-monster history knows him to be.

There’s something timely about that — as seen here, Honka is a kind of proto-incel whose many rejections lead him down a murderous path — but it’s also overly familiar. Dassler plays him with hunched shoulders, bad teeth, and eyes that seem to be looking in two directions at once, the obvious point being to make him as unpleasant to look at as he is to think about. “The Golden Glove” mistakes that unpleasantness for a selling point, and though a movie of this sort shouldn’t be a jaunt, it should at least be insightful. There’s rarely the sense that Akin put much thought into any of this beyond emphasizing the inherent emptiness of it all; it’s closer to a book report than a thesis.

A mercifully small amount of time is devoted to the actual slayings, with the first half of the film focusing on Honka’s abusive relationship with a destitute older woman he meets at the Golden Glove bar and essentially turns into his live-in servant, largely because she has an estranged daughter whom he intends to seduce. (His consistent failure in this regard does little to disabuse him of the notion that he’s actually skilled in these matters.)

Few scenes take place outside of the bar or his flat, with Honka doing his utmost to lure unsuspecting women back to his comfort zone. This is rarely with the explicit intent of hurting or even killing them — that comes when he’s scorned in one way or another. This routine gets old quickly, despite its disturbing nature. That’s in spite of the efforts of cinematographer Rainer Klausmann (“The Baader Meinhof Complex”), whose exceptional lensing adds a kind of beauty to a film that otherwise lacks it.

All that ugliness is contrasted with era-appropriate love songs emanating from both the Golden Glove itself and Honka’s own radio. It would be unsettling if “The Golden Glove” elicited stronger feelings of revulsion, but as it stands, the soundtrack largely functions as a background distraction from everything on which Akin is trying to focus our attention.

What the film lacks in characterization it more than makes up for in the sounds of women’s screams and hacksaws cutting through flesh. The whole affair feels, quite simply, icky in a way that superior projects like “Zodiac” and “Memories of Murder” never do; to his movie’s detriment, Akin seems more interested in merely depicting what happened than taking a stab at why.

If the answer to that question is as nihilistic as “The Golden Glove” makes it seem, another is raised: Was Honka really worth making a movie about it in the first place?