Celebrity-penned nonfiction books have typically served as mutually beneficial partnerships between publishers and stars looking to extend their brands -- but if the top selling books of 2015 are any indication, that relationship may be on the rocks.

"Given our saturation of celebrity culture, sometimes books have a problem finding readers because of fatigue," Jim Milliot, editor of Publisher's Weekly, told TheWrap.

Dunham and Ansari received wide coverage for their sizable book advances: $3.7 million for Dunham's "Not That Kind of Girl," which was released in late 2014 but expected to sell well through the following year. Ansari got a reported $3.5 million for June's "Modern Romance," which is similar in tone to his successful Netflix series "Master of None." Both titles were released by Penguin Random House.

To be fair, none of the releases are abject failures: Dunham's "Not That Kind of Girl" sold 271,931 hardcover copies, according to Nielsen Bookscan, which tracks retail sales. Kaling's "Why Not Me?" moved 198,889 copies, with Ansari on her heels at 178,925.

According to Milliot, publishers of such high-profile titles should be satisfied "with anything over 100,000."

And other titles have sold well despite more modest advances. Patti Smith's memoir "M Train" has won rave reviews and sold nearly 100,000 copies for Knopf, while Mary-Louise Parker's "Dear Mr. You," an autobiography in letters, has also won praise from critics and sold 16,426 copies. 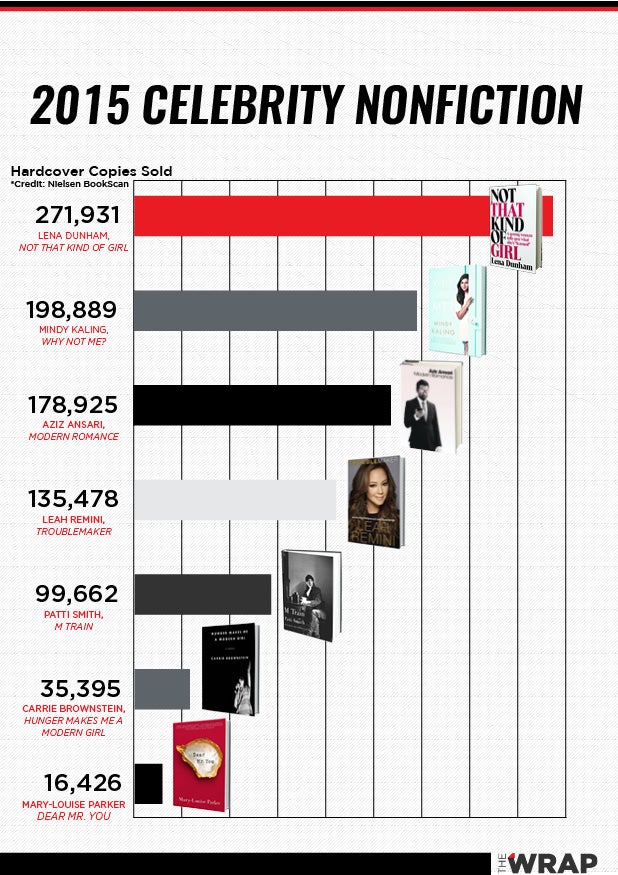 Middling sales for these titles might be symptomatic of audience fatigue, but Milliot said, "Overall, publishers are happy. Publishers are looking for big platforms. The Mindy Kalings, the Amy Schumers," he added.

Schumer signed a reported $8 million deal with Gallery Books, an imprint of Simon and Schuster, for a forthcoming tome.

While astronomical advances get headlines, Milliot cautioned that publishers don't regard stars as "loss leaders. They know everyone isn't going to hit. These kinds of projects from celebrities are simply something publishing will never give up."

One top agent who specializes in packaging books deals for lifestyle gurus and TV talent said the back-scratching matters more than the bottom line. "For a celebrity, they're looking for a brand extension or to hammer home a message that will land them bigger deals, like selling features or TV shows and various products," said the agent.

Book publishers, which have suffered waves of down-sizing over the last four years, count on stars to come with built-in publicity machines. "With celebrity nonfiction, they've got authors with large platforms to help sell," the agent said. "With most deals they also retain options, if someone wants to spin the book off to a creative project or talk show format. "

The insider said social followings and visibility in the press helps -- but talent who has touring built into their day job -- including musicians and comics -- tend to sell more books than celebrities who are more grounded by TV and film projects.

"Any time you're on a tour, you can sell a book," the insider said. "That's why someone like Lena is a bigger risk to me. If I was a publisher, I'd open my wallet for Schumer or Kevin Hart. You have a meet-and-greet on your comedy tour? You sell them right there," the individual said.

Stars with a toe in the lifestyle pool have an upper hand in moving books, too.

"Someone like a reality star that has a viable consumer fan base, like Kristin Cavallari who was on 'Laguna Beach' but still designs shoes and cosmetics -- she'd have an easier time getting a deal to write a memoir than Gary Oldman," they said.