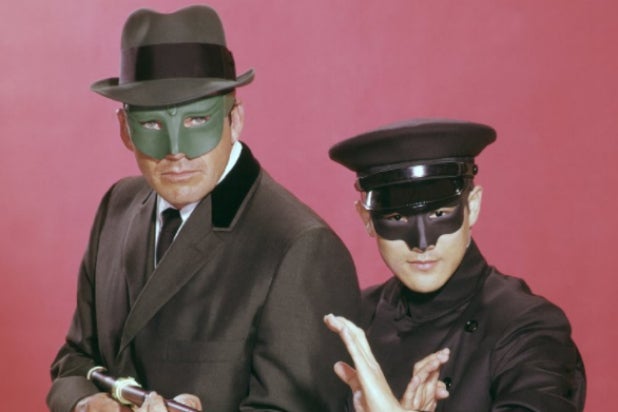 Van Williams in 'The Green Hornet'

A new movie version of “The Green Hornet” may soon be in the works. Amasia Entertainment has won the film franchise rights to the superhero property, the studio announced on Wednesday.

Amasia co-founders Michael Helfant and Bradley Gallo won the rights in a bidding war after it had been previously held by Universal, Dimension Films, Sony and most recently, Paramount.

Helfant is a former president of Marvel Studios and has been passionate about the property for years dating back to the ’60s TV show starring Van Williams and Bruce Lee.

“When I was a kid, The Green Hornet was one of my favorite television series. I loved everything about it – The Green Hornet, Kato, and of course, the Black Beauty. They were the coolest!  It was personally painful to leave them all behind when I left Dimension. So I tried to option the property again at Marvel before it went over to Sony, and then again in 2017 before the rights landed at Paramount,” Helfant said in a statement.  “This is one of the only stand-alone classic superhero franchises,” Helfant said.  “We’re a bunch of fan geeks at Amasia and are thrilled about creating something fresh and truly worthy of this legacy property.  A new world that is relevant and thrilling, while respecting and honoring the original vision of creator George W. Trendle.”

“As long as I’ve known Michael, he has expressed his loving ‘nerdom’ for Green Hornet and passed on his addiction to me,” Gallo said in a statement. “I am looking forward to bridging the film worlds of America and Asia – and I’m very grateful to be on this journey with Michael, Amasia, the Green Hornet family and fellow fans!”

“The Green Hornet” was last adapted into a feature film in 2011 by Sony starring Seth Rogen and Jay Chou and directed by Michel Gondry. The film was a critical disappointment but grossed $227 million worldwide on a budget of $120 million.

The property originated as a radio show before being turned into a series of movie serials in the 1940s, and then most famously as something of a campy “Batman” copycat in the 1960s, though the series helped introduce Bruce Lee to American audiences.

The story focuses on Britt Reid, owner and publisher of The Daily Sentinel. Armed with knowledge from his sources, cool weapons, a supercar known as The Black Beauty, and teamed with his trusty aide Kato, Reid became The Green Hornet, a vigilante crime fighter wanted by the police and feared by the criminal world.

The deal was negotiated on behalf of The Green Hornet, Inc. by David Grace of Loeb & Loeb.