Season 5 of “The Handmaid’s Tale” is nearly upon us.

“The Handmaid’s Tale” Season 4 ended on a dramatic note, as June (Elisabeth Moss) orchestrated the murder of Commander Fred Waterford (Joseph Fiennes) with fellow Handmaid refugees. She then returns home and cradles her baby, still covered in blood. We also see Waterford’s decapitated body hanging above the words “Nolite te bastardes carburondorum,” which means “Don’t let the bastards grind you down.” 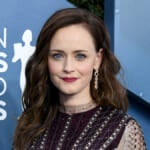 In Season 5, June will face consequences for killing Commander Waterford while struggling to redefine her identity and purpose. The widowed Serena Joy will attempt to raise her profile in Toronto as Gilead’s influence creeps into Canada, while Commander Lawrence will work with Aunt Lydia as he tries to reform Gilead and rise in power. June, Luke and Moira still need to fight Gilead from a distance to continue their mission to save and reunite with Hannah.

In addition to a premiere date, Hulu also released first-look images for the new season. The first is a close up shot of June, which is featured above. The other, a shot of Serena Joy in what appears to be mourning clothes, is below.