Were it not for the impending release of the far superior “Other People” in a few weeks, it would be tempting to call “The Hollars” the death knell of the “constipated white New Yorker gets his groove back by going home to his dysfunctional family when Mom gets cancer” movie. As it is, “The Hollars” feels so painfully familiar and so dramatically undernourished that even the great Margo Martindale can only do so much with this cliché-riddled script.

Martindale plays matriarch Sally Hollar, who collapses one morning in the bathroom, curling iron in hand. In a film like this, though, her health issues serve only as a catalyst for the film’s protagonist, Sally’s son John (John Krasinski, who also directed), to get his act together. At standstills both personally — he’s got cold feet about marrying his very pregnant girlfriend Rebecca (Anna Kendrick) — and professionally, John finds himself reluctantly returning to his small hometown in Ohio to be there for Sally.

Upon arrival, he discovers that the family plumbing business run by dad Don (Richard Jenkins) is on the verge of bankruptcy, so deeply in the red that Don had to fire John’s brother Ron (Sharlto Copley). Ne’er-do-well Ron, of course, has other problems, particularly his jealousy that his ex-wife Stacey (Ashley Dyke, “12 Years a Slave”), mother of their two daughters, has started dating youth pastor Reverend Dan (Josh Groban).

“The Hollars” is that rare film that suffers from an excess of familiar faces. The story here is never particularly engaging, making it that much more jarring when even the smallest roles are filled by well-known actors, whether it’s Mary Kay Place (who has about four lines of dialogue as Don’s sister) or Mary Elizabeth Winstead (as John’s former fiancée, she delivers maybe five). Throw in Randall Park as Sally’s unflappable doctor and Charlie Day as an obnoxious RN, and the film starts feeling more like “Hollywood Game Night” than a family dramedy. 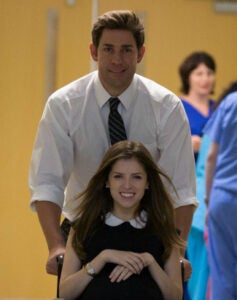 All these famous players, to their credit, do their best to add much-needed heft to the flat screenplay by Jim Strouse (“Grace Is Gone”); Kendrick, Place and Winstead are almost entirely wasted here, but at least Jenkins and particularly Martindale carve out little moments throughout that almost justify the film’s existence. (When Sally, who has spent the entire movie tending to everyone else’s feelings, has a moment of panic before going into surgery, it’s the movie’s most resonant moment.) As for Krasinski, behind the camera for his second feature, his performance is about as featureless as his directing.

Cinematographer Eric Alan Edwards gives the movie a generically sunny look that strips the locations of any identity; this could all be happening in a Small Town, USA set on any Burbank backlot. The best and worse that can be said of his work is that it’s of a piece with the rest of the filmmaking.

“The Hollars” carries on as though it weren’t the umpteenth indie movie to look at family quirks and tragedy through the exact same lens, but there’s no escaping the strong stench of business as usual. These actors, and the audiences who pay money to see them, deserve better.