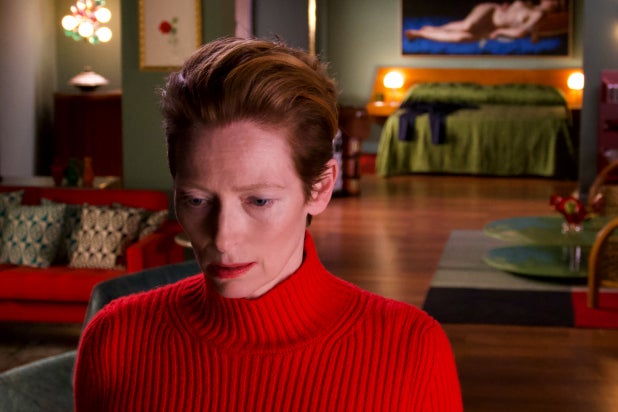 Cinema history will doubtlessly note “The Human Voice” as notable for being the English-language debut of Spanish auteur Pedro Almodóvar — and for its status as a pandemic-driven production — but it’s absolute Almodóvar through and through, from its production design and aesthetic shout-outs to its deep understanding of longing and heartbreak, viewed through the eyes (and the voice) of a hypnotic female lead.

There’s perhaps no actress on Earth more suited to shepherd the director’s first go-round in English than Tilda Swinton, and she’s an ideal creative partner. Her work finds that balance between understated empathy and grand theatricality that marks so many of the great performances in Almodóvar’s work, and as a physical being, she’s practically an architectural presence, much like one of his earlier muses, Rossy de Palma. (Not to mention Swinton’s prior track record as a muse to queer auteurs Derek Jarman, who launched her film career, and Luca Guadagnino.)

Almodóvar, of course, has a history with Jean Cocteau’s “The Human Voice” (which the director is, per the credits, “freely” adapting here). In the 1980s, Almodóvar had hoped to turn Carmen Maura’s acclaimed stage performance of the one-act play into a movie, but he wanted to expand the material to feature length. In doing so, he kept the basic premise — a woman waits for her lover to call and bid her farewell — but eventually chopped and channeled it into the farcical “Women on the Verge of a Nervous Breakdown,” his international breakthrough. (He also included a scene of Maura’s character performing the play in “Law of Desire,” which gets its title from “The Human Voice.”)

She purchases a hatchet (from the director’s brother and producer, Agustín Almodóvar, who wraps up the ax like a bouquet of flowers), she downs a handful of sleeping pills (some of the screen’s most photogenic downers this side of “Valley of the Dolls”), and then, finally, he calls, and the woman finally gets the confrontation that she has both demanded and feared.

Also Read: Pedro Almodóvar on the Real-Life Fears and Aches Behind 'Pain and Glory'

Swinton wrings so much from Cocteau’s words, taking us from woman-scorned rage to a kind of ecstastic masochism and back again, moving her way through another great Almodóvar apartment art-directed by Antxón Gómez when she’s not wandering around the soundstage that surrounds the set. It’s a pandemic-friendly way to keep Swinton from having to walk the streets of Madrid, yes, but it’s also a Brechtian strategy that recalls the aggressively fake city skyline in “Women on the Verge.”

Besides the various Almodóvar relatives that pop up in the hardware-store scene, Swinton does get to act opposite another performer — the uncredited canine who plays her lover’s equally forlorn dog. It’s a great animal performance, full of longing; not many co-stars can hold the screen with Swinton without getting outshined, but this one definitely can.

For all the ways in which “The Human Voice” is different from the rest of Almodóvar’s work, it fits in perfectly well, from the deep reds (in the apartment and in Swinton’s Balenciaga dress) to the cultural referencing: Swinton tidies up a stack of DVDs (two of which are Criterion Collection Blu-rays from one of the director’s inspirations, Douglas Sirk) and novels (including Capote’s “Music for Chameleons,” which comes up in “All About My Mother,” and Lucia Berlin’s “A Manual for Cleaning Women,” which Almodóvar plans to adapt).

Short subjects tend to fall between the cracks in the United States — Sony Pictures Classics, who will be distributing “The Human Voice,” hopes to be an exception to that rule — but this small package stands alongside the exemplary feature-length work in one of this generation’s foremost filmographies. Cocteau might never have imagined ear buds when he wrote his play, but every bit of emotional ache from the original maintains its power in the smartphone era.