Rarely has the lead character from a famous fairy tale been booted out of her own story’s sequel (or prequel, or sidequel, or you be the judge what this movie is), yet that is the fate of Snow White in “The Huntsman: Winter’s War.” Played by Kristen Stewart in the 2012 franchise originator, “Snow White and the Huntsman,” the apple enthusiast doesn’t even turn up in flashback (or forward); we merely hear about how things are going well in her happy kingdom. Seems she was just too boring to bother about.

Instead, this film concentrates on the blossoming of the butch Huntsman himself (a returning Chris Hemsworth), necessitating a lot of backstory/prologue, nudged along by a portentously rich voice over telling us that this story “came long before the Happy Ever After.” It’s also a tale of two sisters, thus taking an early stab at that live-action remake of “Frozen.”

Charlize Theron once again plays the evil Queen Ravenna — we know she’s evil because she plays chess in an off-the-shoulder gown split to the thigh. She doesn’t like the idea of her happy sister Freya (Emily Blunt) falling in love and having a child, so she cruelly scuppers that relationship; heartbroken Freya turns all Ice Queen and retreats to her own kingdom, far to the north.

So far north is it, in fact, that people there are forced to do a Scottish accent. (I’ll let Jessica Chastain have the benefit of that doubt, anyway.) For it is in this freezing realm that Chastain, as Sara, and Hemsworth’s Eric are taken as child soldiers and trained to join Freya’s elite squad of Huntsmen. 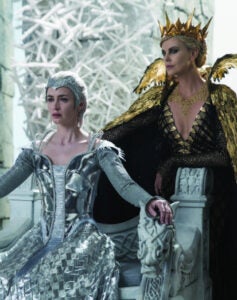 Freya, ice queen that she is with her chain-mail dress, grief-white hair and wolf-like pale eyes, has forbidden all love in her kingdom. Bad news for hormonally aroused lead warriors Eric and Sara, whose illicit passions in what looks like the land’s only hot tub enrage Queen Freya. She builds an ice wall between them, to freeze them asunder. Or something.

Cramming in so much setup and new fairy tale “origin” isn’t easy, and, to their credit, writers Evan Spiliotopoulos (the Brett Ratner “Hercules”) and Craig Mazin (the second and third “Hangover” entries) achieve it with economy, leaving the effects and design teams to splash the cash with handsome palaces, killer dresses and raging goblins.

The film eventually settles into a quest movie (complete with a wobbly rope-bridge scene), as Hemsworth’s Eric joins up with some comedy sidekick dwarves — yes, there be dwarves — played by British comedians Rob Brydon (“The Trip”) and Nick Frost. They’re off to find Ravenna’s Magic Mirror (it’s more a cross between the Rank gong and the Wimbledon ladies tennis trophy if you ask me), which has been sent away from her kingdom so that no one should look into its evil powers. Turns out, it was hijacked and stolen en route to a place called the Sanctuary. (Was it going for a spa weekend?)

There are more fairy tale realms to cross, a sylvan glade with red squirrels and hedgehogs with flowers on their spikes, as well as goblin lairs and, yes, more ice, with just enough time for Emily Blunt to ride in on a Polar Bear. “The Huntsman: Winter’s War” is all fairly silly, but unfortunately the filmmakers don’t quite realize it — along with banning love, decent gags seem to have been outlawed, too.

Still, there are a lot of fights involving sticks and axes and good old bows and arrows, and the climax brings about a hefty dollop of star power and CGI magic as the themes of love, betrayal, sisters and dwarves slip and slide over the slushy floor of the Ice Palace. It is here that debut director Cedric Nicolas-Troyan flexes his Oscar-nominated (for “Snow White and the Huntsman”) visual effects credentials.

Hemsworth carries off Eric with his customary beefy swagger, even employing a bit of compatriot Mel Gibson‘s “Braveheart” accent. Chastain is clearly not at her most comfortable in this nonsense, yet she hurls herself into the ninja archery with gusto, game face squarely set to on.

Perhaps because she’s too busy concentrating on her swordplay and Scottish-ish accent, there’s no real spark between Chastain and Hemsworth, reducing this to a competent-enough fantasy fairy tale that tries to appeal to a young “Game of Thrones” crowd alongside fans of the Disney cartoon universe and their current live-action reboots. It mostly succeeds.

And if all else fails, at least it’s a movie smart enough to know that, frankly, you can’t beat Charlize Theron, covered in gold, shooting lethal spiky tentacles out of her midriff.