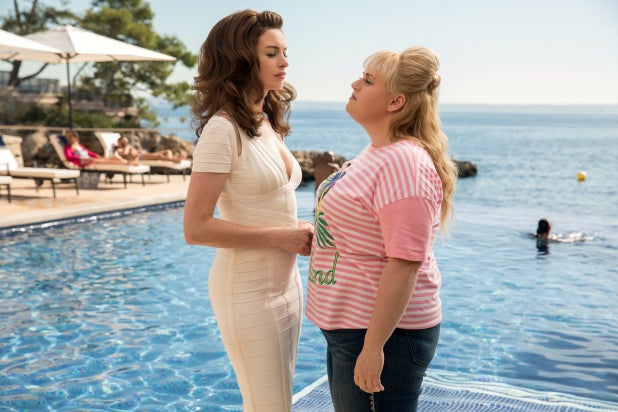 There is a smart movie nestled somewhere in director Chris Addison’s romp, “The Hustle,” but you have to weed through a whole lot of foolery to get to it. The new film is ripe for big laughs with Anne Hathaway and Rebel Wilson as, respectively, the snobby British bombshell with sticky fingers and the rough-around-the-edges though equally cunning con artist, but neither actress is given rich enough material to bring the film’s most interesting ideas to the finish line.

Hollywood has had a growing fascination with the female swindler (think “Widows” or even “Oceans 8,” which also stars Hathaway), often to confront a larger issue of sexism and lack of female agency. And for about the first 20 minutes of “The Hustle,” it looks like screenwriter Jac Schaeffer — sharing credit with her antecedents, the creators of 1964’s “Bedtime Story,” Stanley Shapiro and Paul Henning, as well as Dale Launer, who wrote that film’s 1988 remake, “Dirty Rotten Scoundrels” — is also trying to illustrate gender issues as well.

For instance, one of the first scenes points to how superficial men are in the dating space and how they think of women as vulnerable and thoughtless in order to take advantage of them. Penny (Wilson) is catfishing a guy (Timothy Simons, “Veep”) who thinks he’s at the bar to meet a buxom blonde with whom he’s been messaging for a month; instead, he’s duped by Penny pretending to be his date’s sister, claiming his text-girlfriend is too shy to show up in person because she’s only an A-cup and can’t afford a boob job. Spoiler alert: the guy with the paper-thin personality is willing to do whatever it takes — even Venmo-ing Penny hundreds of dollars on the spot — for the breast enhancement of a made-up woman in whom he’s only interested in for sex anyway. It’s one of those funny-because-it’s-true moments in the film that point out a real issue but fail to interrogate it.

And that’s a shame, because there is certainly ample opportunity to present a subversive story about two masterful female scammers who employ tricks typically executed by men in film against them. In the first heist we see with Josephine (Hathaway), she’s playing a dim-witted Southern belle who can barely hold up her end of a conversation, so of course she attracts a googly-eyed international tycoon determined to spend the night with her. She ends up lifting his wife’s diamond bracelet right out of his hands.

The fact that these men are too blinded by their preconceived notions of women even to consider that they are capable of committing these acts or that they’re smart enough to pull them off is a pervasive ideology that could resonate with any female audience member. So the very thought of Penny and Josephine joining forces in the south of France and consequently torching the criminal patriarchy is simply delectable.

See Photos: 18 Movie Reboots With Gender-Swapped Leads, From 'His Girl Friday' to 'The Hustle'

But that’s not what happens at all. Much like the male-centered “Dirty Rotten Scoundrels,” “The Hustle” pits the two women against each other and turns conning men into a competitive sport. Specifically one man, though: an app inventor (Alex Sharp, “How to Talk to Girls at Parties”) who they assume is too immature and nice to suspect anything from them. There’s no camaraderie that ensues between Penny and Josephine or a sense that they’re even contending with the same issues. In fact, the class difference between the two women is often used as a tired punchline. Penny is the clumsy one with the tacky clothes who doesn’t know how to walk in heels, while Josephine is the polished ballgown diva who uses her statuesque figure to claim authority over both her male victims and Penny.

Though it makes for some impeccable costumes by designer Emma Fryer (“Free Fire”) — particularly Josephine’s colorful and gorgeous pantsuits and stunning dresses — the contrast between the two women isn’t anything we haven’t seen before. How many times do we need to see the fat woman be the punchline — and how much longer will Wilson endure this characterization? Similarly, how often have we already seen the snooty British female character with a stick up her butt (as Penny describes Josephine in the film)? While the two actresses are charming to watch and work well together, nothing about what happens in the film is particularly new or exciting. It all falls flat, even the laughs (that are few and far between).

It would have been more interesting if the roles were reversed, especially since Wilson already has an Australian accent and Hathaway, who’s American, is feigning a continental lilt. As provocative as “The Hustle” begins, the film could have really shifted the status quo with different casting. It is, however, nice to see Wilson’s character end up in a romantic situation rather than Josephine, though the romance mostly takes place offscreen.

There are so many missed opportunities to make this film sharper. Even with a female writer brought on board for this third go-round, the multiple voices are diluted into one dull theme and mute the women’s perspective. As a result, “The Hustle” goes from a forward-thinking female-centered modern reimagining to a silly, empty, and entirely useless remake.