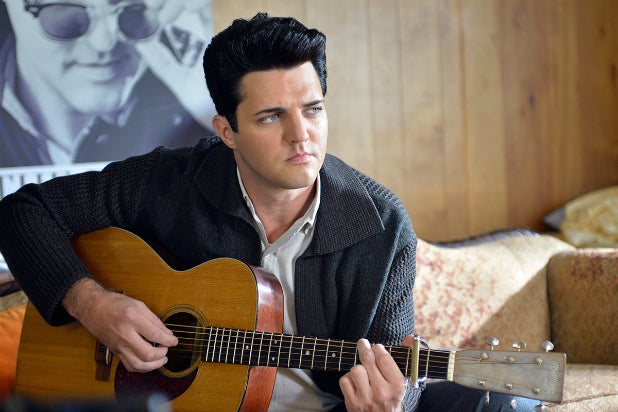 “The Identical” gives us a premise so bonkers that one can only wish John Waters had gotten a crack at it: identical-twin Elvises, one spiritual and one profane, as though the “How Great Thou Art” singer and the “Hound Dog” hip-shaker were two separate people.

Unfortunately, this juicy, ludicrous plotline is at the service of a banal and seemingly endless melodrama, riddled with clunky, faith-based messaging and the cruddiest, least dangerous “devil’s music” you ever heard. In Presley-an terms, it makes “Kissin’ Cousins” look like “Jailhouse Rock.”

“The Identical” immediately lets us know that we’re in for the kind of bad movie that spawns Twitter memes and future midnight screenings; first of all, we discover that the movie’s fake-Elvis character is named, no kidding, “Drexel Hemsley.” (Apparently “Schmelvis Schpressley” didn’t test well with early audiences.) And moments after we’ve digested that nugget, Howard Klausner’s screenplay launches the awkward and unnecessary narration that will guide us through this ludicrous tale.

In Depression-era Alabama, the unemployed William Hemsley (Brian Geraghty) frets that he won’t be able to feed the twins that wife Helen (Amanda Crew, “Silicon Valley”) has just birthed, so he fobs one of them off on infertile itinerant preacher Reece Wade (Ray Liotta) and his spouse Louise (Ashley Judd).

Reverend Wade, incidentally, preaches equality of the races and Christian love for the Jews because, you know, that’s what fundamentalist revival preachers in the Deep South in the 1930s were totally doing, for real. Of course, this is a movie where all the 1950s rock and roll sounds like either a Knott’s Berry Farm “Golden Oldies” stage show or a 1990s soft-rock jam, and where black nurses got to work in white hospitals in Eisenhower-era Tennessee, so perhaps “The Identical” is meant to be science-fiction.

(And don’t even think too hard about the scene later in which Elvis — who, in real life, had a twin brother who was stillborn — is mentioned, meaning that in the universe of this film, there’s an Elvis, and there’s this Drexel guy who’s exactly like him, and there’s also a hidden identical twin to Drexel, and that sound of a vein popping in the back of your head is actually the late Ed Margulies, co-author of “Bad Movies We Love,” opening a bottle of champagne in Valhalla.)

Anyway, Drexel stays in the sharecropper shack, thinking that the empty box buried out back contains his brother’s remains, while his twin grows up to be Ryan Wade, preacher’s kid. Squeaky-clean teenage Ryan (Blake Rayne) nonetheless sneaks off at night with pal Dino (Seth Green, passing Go and collecting $200) to listen to “colored” music at roadhouses. (This being a Christian movie, Ryan never drinks, and the floor is filled with dancers keeping several feet away from their partners.)

Drexel becomes a huge rock star, but it never occurs to Ryan that there’s anything strange about the fact that they look exactly alike. The film tries to build drama out of Reece’s promise to William not to tell Ryan about his biological parents, and about whether or not Ryan will follow Reece’s footsteps to the pulpit, but first-time director Dustin Marcellino gets lost in an array of bad wig continuity and even worse songs (I may never get “Boogie Woogie Rock and Roll” out of my brain, try though I might) on his way to an utterly cornball conclusion.

The performances range from the merely serviceable (Liotta) to the perpetually wet-eyed (Judd) to the hopelessly out of one’s depth (first-timer Rayne is asked to carry this whackadoo spiritual soap opera­-cum-fake biopic on his shoulders, and it’s more than an amateur should be forced to do).

Still, credit must be given: run-of-the-mill mediocrities come and go, but “The Identical” is the most woozily misguided flop to grace the screen since the “Oogieloves” movie. Connoisseurs of the most wonderfully terrible cinema need to run out and catch this one early and often. Flying-Elvis jumpsuit optional.