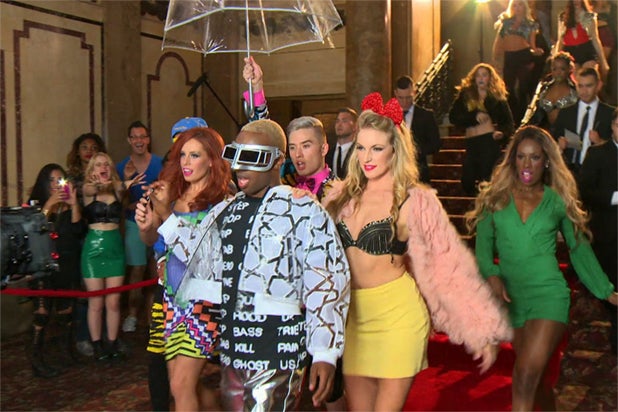 It was a flash mob set inside of a Target that earned Todrick Hall the approval of Beyonce and put him on the map back in 2011, but it was a different flash mob altogether that helped score him his new MTV series. For one of the initial pitch meetings, Hall recruited his friends and collaborators to put on a surprise song and dance performance for executive producers Brian Graden and Danny Rose.

Set to an original song called “Put Me on TV,” the flash mob is what sold the execs on the idea that eventually became Todrick’s reality show premiering Monday on MTV. The performance, produced in less than a day, met Rose and Graden in the building’s parking garage and followed them upstairs and into the apartment where the meeting was set to take place.

“We had been standing there for a little while, and then the elevator doors opened and someone came running out with a boom box,” Rose told TheWrap of the meeting. “Then this whole flash mob came out singing to this song that I had never heard, but was very catchy. It was hilarious.'”

“It was the first time I’ve had flash mob pitch in my life,” said Graden. “And in retrospect I should’ve expected something incredibly clever [from Hall], but that never occurred to me.”

“Thought you were coming for a meeting, but we’re gonna put on a show,” Hall, who was waiting in the apartment for the producers to arrive, sings in the song.

After making a name for himself posting homemade music videos on YouTube, Hall made headlines in 2011 when a video of him and his friends performing a flash mob set to Beyonce’s “End of Time” in a Target earned him a shout-out from the pop star online.

Hall’s YouTube page has more than 1.6 million subscribers and 225 million combined views across all of his videos, including original songs, covers of Top 40 hits and pop-Disney mashups like “90s Disney.””He has a vision for everything that he does, and he just goes for it. Really goes for it,” said Rose.

“If he’s going to put all of this energy into us just getting together,” said Graden, “that’s the kind of guy you want to be in business with, because he’s going to do whatever it takes and work twice as hard as anybody else might to make this show a reality.”

But according to Rose, what stood out most in the performance was that Hall doesn’t do it alone. He was able to call his friends together to help him with the performance, with some staying up until 4 a.m. to work on it and others jumping in with just a few minutes to learn the choreography on the fly.

“He makes everyone feel good about themselves just being around him,” he said. “He makes them feel wanted, and like they’re part of something big.”

Listen to the exclusive audio of Todrick’s flash mob track “Put Me on TV”: