With its basic pitch and premise, “The Intern” could have been a sharp-toothed look at work and worth in the 21st Century, as a 70-year-old retiree (played by Robert De Niro) enters a senior’s internship program at a busy, bustling fashion dot-com run by a stressed-out prodigy of a founder (Anne Hathaway).

But this is a film by Nancy Meyers, whose Crate & Barrel comedies — full of lame characters, lavish furnishings, tastefully drab colors, no sharp edges — like “It’s Complicated” and “Something’s Gotta Give” have made her our foremost chronicler of the privileged class enjoying their privileges.

Long on kitchen-design erotica and short on conflict, “The Intern” is a cozy slanket of a movie, one that wraps you up in a suffocating hug and tries to waterboard you with the milk of human kindness.

That isn’t necessarily a bad thing, or, rather, it’s exactly the thing that ticket buyers want out of a comedy this fuzzily edge-less: Lessons learned, feelings shared, wisdom imparted and received.

“The Internship” delivers what it promises, no more and no less, and faulting it for not being a rougher, tougher, smarter film about how much we all seem to live our lives through our work today would be like yelling at a spoon for not being a knife.

De Niro’s Ben Whittaker gets the gig as an intern at Hathaway’s e-shopping empire, About the Fit. He’s assigned directly to Hathaway’s frazzled founder Jules Ostin. She’s initially reluctant, but Ben’s usefulness and old-school stoicism wind up making him at first useful and then indispensable. That’s one of the biggest problems with “The Intern,” namely that Ben is defined by his being widowed, kindly and avuncular, and by almost nothing else: He’s perfect, a Magical Senior who exists only to improve the lives of the needy, flawed people around him with almost no thought of his own needs or flaws.

Hathaway’s Jules is more of a wreck, but that shouldn’t be confused for depth of character; she’s just a problem for De Niro to gracefully, gradually solve. Jules has a company and a marriage and a child, and no, it turns out, she can not have it all; thanks to Ben’s tutelage, though, she figures out what she can have, and what she truly wants. Meyers is a slightly shabby scripter — there’s a comedy scene involving a waylaid e-mail that does nothing, even though it’s rather funny — and you can see the film’s every twist and turn so far in advance that the film might as well be shouting each of its plot points from your Waze app. 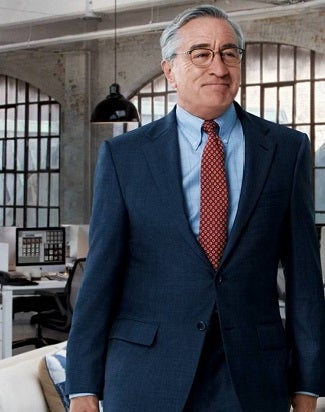 Even so, if “The Intern” is a little bland and basic, at least the people onscreen execute their duties well enough. De Niro plays a real character here, not just an assemblage of acting tics and facial expressions; Hathaway also handles every moment and line nicely, although if you dislike watching her cry on-screen, you have ample reason to shun this film. As for the look of the movie, cinematographer Stephen Goldblatt (“The Help,” “Get on Up”) has created a handsome film, even if it’s one that feels so managed and manicured you feel like the characters are walking through a high-end furniture showroom’s display areas.

“The Intern” is a reverse-Frankenstein’s Monster of a movie, smooth and scarless and seamless but lacking the voltage or spark of vitality that would make it come alive outside of the moments when De Niro and Hathaway are on-screen opposite each other. Considering the movie’s fortune-cookie-style “insights” that old and young have much to learn from each other, it’s only appropriate that De Niro and Hathaway’s charms, and those alone, comprise the saving graces of “The Intern.” After all, it’s they, not Meyers the director or Meyers the screenwriter, who ultimately accomplish the task of pleasing the audience.