Stick half a dozen or so old friends in a country house for a long weekend, add a dash of relationship dysfunction and life crises, and bam: instant movie. However, “The Intervention,” the first feature written and directed by actress Clea DuVall, feels at times like it was reconstituted from other movies, especially a big chunk of “The Big Chill.”

This time, the friends are late-model Gen Xers, heading towards their 40s but for the most part still grappling with who and what they want to be. There’s Annie (Melanie Lynskey), a jittery problem drinker approaching her oft-postponed wedding to the genial but mildly oblivious Matt (Jason Ritter); Jessie (DuVall) and Sarah (Natasha Lyonne), who after three years together are still a few steps shy of cohabitation; Jack (Ben Schwartz, “Parks and Recreation”) and Lola (Alia Shawkat), a May-December, or at least May-August, pairing whose maturity is belied by their respective ages — in short, six different flavors of mess, all stuck at, or in one case, recoiling from, life’s milestones.

See Video: Clea DuVall on Reuniting With 'But I'm a Cheerleader' Co-Stars for Her Directing Debut 'The Intervention'

By their friends’ standards, Peter (Vincent Piazza, “Boardwalk Empire”) and Ruby (Cobie Smulders) have it all: marriage, three kids, careers. But they’re also the reason this group has converged, in hopes of splitting this acrimonious pair apart before their thoroughly poisoned union — what Annie calls “the weight of their marital prison” — does even greater damage. 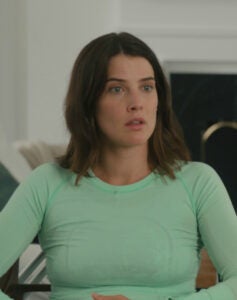 The trouble is that the would-be interventioners have so much of their own stuff to sort through that they keep delaying the ostensible reason for their reunion; they have to find their balance before they have so much as a leg to stand on. One more swiftly-downed mimosa, a friend warns Annie, and she’ll be the one getting the uncomfortable group talk.

Peter and Ruby plainly loathe each other from the moment we see them, he yammering generic business-speak into his cellphone while she seethes in the passenger seat, but when they crush the opposing teams at charades, we’re reminded of the bond longtime couples share even when they’ve lost sight of how to love one another. That’s not much when day-to-day happiness is hard to find, but it’s something DuVall lets us see even as the couple’s friends struggle to understand it.

Although DuVall’s focus is clearly on her actors, she’s at least gone to the trouble of making sure “The Intervention,” which was shot by cinematographer Polly Morgan, has a thoughtful visual style: She likes to strand characters at the edge of her widescreen frames, underlining their isolation and lack of balance.

As you’d expect given her primary profession, DuVall draws nuanced and distinctive performances from her cast, although Piazza struggles to connect Peter’s surly, almost thuggish exterior with his abiding romanticism, and Lynskey is too often relied upon to cover the script’s lapses with Annie’s flighty unpredictability. It’s a movie where the characters act the way they’re required to rather than the way you feel they might; you sometimes feel like the actors are making up for the script rather than bringing it to life.

That said, this cast can handle some heavy lifting. “The Intervention” is a movie whose small moments are worth savoring even when the big ones don’t come off as intended. Watch for the way Lynskey suggests another character needs to take off his blinders, tentatively mimes removing an actual set of blinders, then thinks better of the gesture halfway through.

You know the characters’ problems are going to come to a head, and some will be tidily resolved (too many, as it turns out), but it’s more engrossing to just hang out with them in all their damaged glory, before the plot marches through the room with its clunkiest boots on.