Paramount+ dropped the trailer for “The J Team,” a new, live-action musical starring and executive produced by social media sensation JoJo Siwa. In the film, Siwa plays a super enthusiastic, bubbly dancer who is intent on not letting her new, rule-obsessed dance teacher get in the way of her shine.

“We’ve all been told that we don’t fit in before,” Siwa says in the trailer. “What if we celebrated everyone being unique?”

The trailer shows JoJo getting kicked out of her beloved dance troupe after being forced to “blend in” with her coach’s new rules and restrictions. She’s lost herself, so much so that one of her friends tells her that “someone’s stolen [her] sparkle.” Heartbroken, but determined to reignite her love and passion for dance, JoJo puts together a new dance troupe, where everyone is free to be who they are and of course, wear the biggest, most colorful bow they can find. 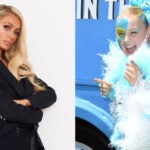 The official description for the musical reads: “‘The J Team’ is a 90-minute feature-length film that follows a young girl named JoJo whose life is turned upside down when her beloved dance coach Val decides to retire and is replaced by a sparkle-hating instructor named Poppy. Wanting to stay in the running for an upcoming dance competition, JoJo and her best friends, The Rubies, must try their hardest to abide by Poppy’s new, harsh rules. Realizing she cannot hide her sparkle or bow anymore, JoJo is kicked out of her dance troupe and must rediscover what dancing means to her.”

Alongside Siwa, cast members of “The J Team” include Tisha Campbell-Martin (“Martin,” “Empire”) as Poppy, Laura Soltis (“Hiccups”) as Val, Julia Marley (“Dead to Me”) as Nina, and Kerrynton Jones (“Little Fires Everywhere”) and Kiara T. Romero (“The Prom”) as The Rubies.

The live-action musical is directed by Michael Lembeck (“The Santa Clause 2,” “Tooth Fairy”), written by Eydie Faye (“Fuller House”) and produced by Ron French (“Five Star Christmas”). Don Dunn (“To All The Boys I’ve Loved Before”) is the executive producer. 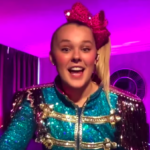 An original soundtrack with six new songs from JoJo Siwa and more will release on Friday, August 27. “The J Team” will debut on Paramount+ September 3.

Check out the trailer here or above.