Rudyard Kipling’s “man-cub” Mowgli returns to the wild in “The Jungle Book,” but this time he’s got the latest in digital animation to bring his animal friends and enemies to vivid life. If The Walt Disney Company insists upon cranking out live-action remakes of its animated classics – which is neither an inherently good nor terrible idea – this time around there’s an effort to accomplish visual feats that weren’t previously possible.

This “Book” might lack the post-vaudeville razzamatazz of its predecessor, but director Jon Favreau and a team of effects wizards plunge us into one of the big screen’s most engrossing artificial worlds since “Avatar.” (Not to mention the most convincing conversational creatures since “Babe.”) I don’t know where the fakery stops and the real animals, waterfalls and veldts begin in this movie, and I don’t really want to.

It’s a testament to the total-immersion powers of “The Jungle Book,” from its visual splendors to its sound design, that the seams never show; even more impressive is the film’s use of its craft not merely to dazzle us but also to further its dramatic agenda. It’s all well and good to believe that a boy is talking to the she-wolf who raised him, but that illusion only matters if tears come to your eyes when they must part.

Adapting the Kipling stories, screenwriter Justin Marks (“Street Fighter: The Legend of Chun-Li”) stays close to the path of the 1967 cartoon: orphaned Mowgli (Neel Sethi) is found in the jungle by wise panther Bagheera (voiced by Ben Kingsley) and raised by a pack of wolves led by Akela (Giancarlo Esposito) and Raksha (Lupita Nyong’o). Fearsome tiger Shere Khan (Idris Elba), whose face was disfigured by the “red flower” (humans call it fire) wielded by Mowgli’s father, demands that the boy be turned over to him. 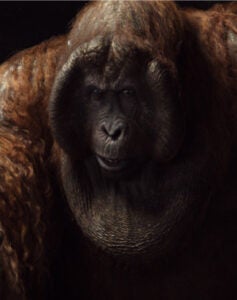 Bagheera tries to take Mowgli to the man-village, but along the way, the boy falls in with friendly, hedonistic bear Baloo (Bill Murray), who must team up with Bagheera to save their human charge from ape king Louie (Christopher Walken), who wants that “red flower” for himself so that he can climb the evolutionary ladder. But while Mowgli is torn between his animal compatriots and his true home, Shere Khan’s reign of terror demands a confrontation between boy and tiger.

Favreau and legendary cinematographer Bill Pope (“The Matrix,” “Scott Pilgrim vs. the World”) capture both the beauty and the danger of the jungle, and the many perils Mowgli faces are genuinely thrilling, from the seductive embrace of giant serpent Kaa (Scarlett Johansson) to the impending collapse of the giant stone temple that is Louie’s palace. The fine voice cast – including the late Garry Shandling as a neurotic porcupine – imbues these immortal characters with genuine personalities and eccentricities, aided greatly by the animators who give the creatures such expressive eyes. (Go look at “Mars Needs Moms” or “The Polar Express” for a reminder of how dead eyes can sink your CG movie.)

If there’s one element of “The Jungle Book” that doesn’t quite play, it’s Favreau’s apparent reticence over the beloved songs from the 1967 version. He assumes, not incorrectly, that audiences will want to hear “The Bear Necessities” and “I Wanna Be Like You,” but these tunes are included somewhat haphazardly: Sethi (who’s clearly adept at acting opposite tennis balls with eyelines drawn on them) and Murray warble the first verse of “Necessities” twice, while Walken scats through a few lines of the latter. (Over the closing credits, the song-and-dance man gets to cut loose on the whole thing.)

The film would have been better served by either cutting the numbers altogether or by taking a full plunge. (It’s a good sign that “Dreamgirls” director Bill Condon is doing the studio’s “Beauty and the Beast” remake, which will no doubt give us all the songs from both the movie and stage versions.) Apart from that misstep, however, “The Jungle Book” delivers a coming-of-age tale that never gets lost in the thickets of the technology that made it possible.