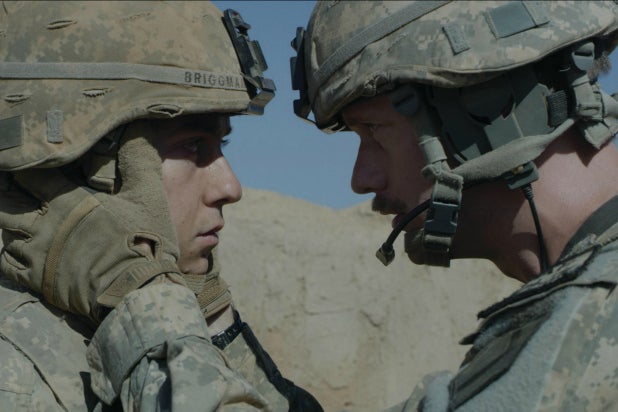 Andrew Briggman (Nat Wolff) is ready to go into the army. In his spare time, the young man works out and moves around his room as if avoiding enemy fire. He’s still boyish in these moments — hitting his head on a toy basketball hoop in his room and using his skateboard as a stand-in rifle. He thinks he’s ready for war and to follow in his father’s footsteps into service. However, Dan Krauss’ sobering drama “The Kill Team” shows that there’s nothing to prepare a young soldier for when your commander leads you and your brothers-in-arms astray.

That sense of Andrew’s promising energy fades quickly once the story shifts to Afghanistan in 2009. The cinematography (by Stéphane Fontaine, “Jackie”) imagines a color-drained horizon, a place where everything is dusty and the brightest pop of color is the overhanging pale sky. The War on Terror is still claiming lives on both sides, and the movie quickly establishes how bleak and sketchy the frontlines remain when Andrew’s squad loses their leader on the way to give local children candy.

Like other recent war movies, there’s an uneasy tension throughout the film, as it’s almost impossible for the soldiers to tell the difference between enemy and civilians. One man who’s not going to play by the standard rules of combat is Sergeant Deeks (Alexander Skarsgård), the new leader assigned to Andrew’s platoon. He’s a shoot-first-ask-later type. He’s also a terrifyingly calculating boss pitting his soldiers against one another to assert their leadership potential, and he soon leads the men to kill more locals and plant fake evidence to hide their crimes.

As Deeks spreads the same bloodthirsty mentality to his men, Andrew questions his squad leader’s actions and shares his concerns with his military dad. He must then decide whether to risk whistleblowing, which would put him in his squad’s line of fire, or to keep a low profile to survive the war and his fellow soldiers.

Based on the true story of Adam Winfield, “The Kill Team” is both a tense moral thriller and a disheartening account of our country’s actions abroad. Many of the details of the group’s experiences come from Krauss’ documentary of the same name. In the 2013 film, Winfield, a few of his fellow squad members, and his parents retrace the events of these unlawful kills led by Staff Sergeant Calvin Gibbs while facing the consequences of those attacks.

In both versions, the squad leader is a domineering presence, towering over the men who sought his approval. As envisioned by Skarsgård, Deeks is the type of leader to speak so softly that you have to lean in to hear him, to shower praise and attention on his chosen favorites, and to ink skull tattoos on his shins to show off the number of kills he’s acquired while on multiple tours. While he’s a more of a mystery in the documentary, Skarsgård gives him a different kind of ominous edge — a quiet demeanor and a scowling poker face that makes it almost impossible to figure out what he’s thinking.

Like the documentary, the narrative movie doesn’t absolve Andrew/Adam from his own mistake; instead, it explores war’s complicated morality through his experience. On the third attack by the self-christened “kill team,” Andrew is part of the firing squad that kills a man. The story is no longer a simple morality play of good and evil, but one that shows how hard it can be to do good when a system is set up to reward the evil. Other horrific behaviors described in the documentary are lightly recreated in the film but not to its full graphic extent, potentially as a mercy to the audience or to avoid sensationalizing the tragic deaths of three unarmed Afghani citizens, the youngest of which was a 15-year-old boy.

The documentary serves as a more of a holistic view of this sad chapter in American history, compiling various testimonies and featuring Winfield’s parents and fellow platoon members much more prominently. The narrative film enhances Andrew’s feeling of isolation in his unenviable position, the paranoia that crept into every part of his life and the unending guilt of not figuring a way to stop the killings sooner. Overall, this latest version is still relatively straightforward, with somber music cues and enough artistic license to separate it from the archival footage in the documentary.

Krauss’ biggest achievement with this new project is that he hasn’t let this story slip into America’s collective amnesia about the War in Afghanistan, which has unceremoniously surpassed the Vietnam War as America’s longest conflict. As one of the men in the documentary notes, this “Kill Team” story is more common than we’d like to think. This is just the story of those who got caught.