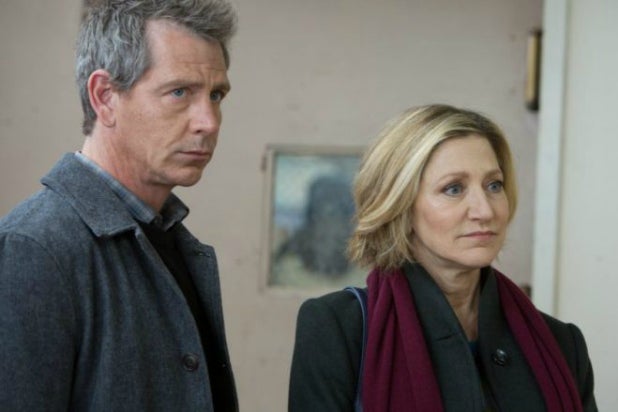 Throughout the course of her steadily exceptional career, writer-director Nicole Holofcener (“Enough Said,” “Walking and Talking”) has established herself as a peerless master of observation, exquisitely attuned to human foibles and frailty.

Her approach, however, remains the same: both minutely unsparing and generously empathetic. (For what it’s worth, this description applies equally well to the excellent festival biopic “Can You Ever Forgive Me,” which Holofcener co-wrote and Marielle Heller directed.)

Also Read: James Gandolfini's Last Director on His Death: 'I Wanted to Make Him Proud'

Holofcener has deftly adapted Ted Thompson’s 2014 novel about Anders Hill (Australian actor Ben Mendelsohn, “Bloodline”), a finance guy living in mega-wealthy Westport, Connecticut. As seen here, Westport is the kind of place where wives in Range Rovers gather at the train station every night at 7 p.m., to pick up husbands who have just enough time to eat and sleep before heading back to banking.

Despite the resultant mansions and manicured lawns, no one seems very happy with this arrangement. The women drink alone in their open-plan kitchens, the men drink together in the leather-clad dens, and the kids get high on the bluestone patios when their parents aren’t looking.

Anders was particularly unhappy on this treadmill, so he didn’t just step off: He broke the damn thing, noisily quitting his job and divorcing his wife, Helene (Edie Falco), so he could be “free.” So far this high-minded plan has landed him in a depressing condo, from which he makes one terrible life choice after another while resentfully watching his family move on.

Not that things are entirely easy for them, either. Helene’s about to get remarried but is still caring for her son (Thomas Mann, “Me and Earl and the Dying Girl”), an unemployed 27-year-old recently out of rehab. She’s also supporting her depressed best friend (Elizabeth Marvel, “Homeland”), whose own troubled kid (Charlie Tahan, “Ozark”) is still in high school but also headed to rehab.

No detail ever seems to go unnoticed in Holofcener’s world, and viewers could spend the entire running time simply admiring her powers of surveillance. This begins with the lenticular feel of the opening scenes, in which excess opportunity seamlessly shades into suffocating oppression.

Similarly, the crisply-shot houses are all stylistically different yet theoretically identical: Each is beautiful, meticulously decorated, and very cold. The same could be said for many of the humans inside them, though Holofcener’s natural charity always allows us to see the messiness beneath the placid surface.

Also Read: 'Bloodline' Star Ben Mendelsohn Tells Us Why He Offered to Have His Teeth Pulled for a Role

Fans of her previous work may also be gratified to know that despite the focus on one man’s midlife meltdown, she makes plenty of room for the women and children at the edges of Anders’ world. Falco is reliably flawless, as the sort of ultra-competent — and inevitably exhausted — wife-mother-friend usually held up as a societal ideal. Mann and Tahan are also memorable, playing lost boys whose leisure-induced lack of structure becomes their undoing. Thanks to both strong performances and thoughtful writing, their anxieties and errors feel grounded in reality. They’re doing their best just to stay afloat, and we feel for them even as we wince or worry at their mistakes.

Anders is … more complex. His weaselly demeanor suggests an outsider’s mindset, rather than the money-drunk arrogance his Wall Street-to-Westport commute is meant to represent. But while a smoothly handsome actor like Jon Hamm or Bradley Cooper might feel more naturally suited to the role, the unexpected casting adds an interesting twist that helps set the movie apart from other stories of upper-middle-class malaise.

Few are better at playing villains than Mendelsohn, and for a while, Anders’ sheer awfulness is genuinely breathtaking. Is this actor really brave enough to give us such an irredeemable yet uncomfortably relatable protagonist? Is Holofcener? It’s a thrilling thought, and one that carries us well into the movie.

While Anders’ current crisis forms the film’s centerpiece, it’s clear that he was no better, happier, or kinder a decade ago. There’s an undeniable charm to his shambly confusion, and the easy apologies he’s constantly dropping. But he’s still a toxic narcissist, who innately expects the world to revolve around his whims.

We rarely see egos so unvarnished on screen, and it’s to Holofcener’s credit that she allows her antihero to remain true to himself. But this does set us up for a deflated disappointment, when convention finally wins out. Anders destroys everything he touches, often literally, and yet, in time-honored cinematic fashion, he is rewarded nonetheless. (It’s especially dispiriting to see Connie Britton fill this thankless role.)

That’s an unexpected misstep from Holofcener, who crafts most of the movie with characteristically sharp skill. Her update on “Ice Storm”-style suburban ennui feels particularly potent right now, in its vision of a rotting establishment. But in the end, Anders’ deeply-rooted entitlement proves regrettably unassailable.