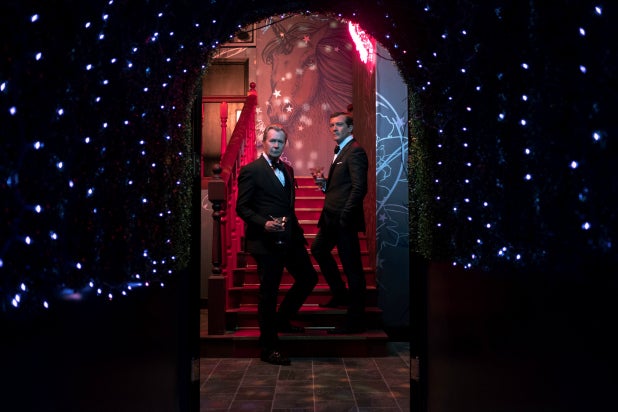 Steven Soderbergh has crafted a sharp and funny tale about rapacious greed and the exploitation of the working class — it’s called “High Flying Bird,” and you should check it out on Netflix if you haven’t already. Also coming to Netflix is Soderbergh’s second feature of 2019, “The Laundromat,” and it’s a well-intentioned hot mess.

Soderbergh and screenwriter Scott Z. Burns (the “Contagion” writer adapts Jake Bernstein’s non-fiction book “Secrecy World”) attempt to follow the “Big Short” playbook of taking complicated financial concepts and breaking them down for a mainstream audience, complete with actors talking to the camera. For all their good intentions, though, “The Laundromat” flails about, with an excess of bad ideas that undercut the justifiable outrage over the events depicted.

A reminder: In 2016, a whistleblower released more than 11 million documents from the law firm Mossack Fonseca, detailing the labyrinth of shell companies and holding entities that shielded the world’s richest individuals from paying taxes on their fortunes. Late-stage capitalism being what it is, the mega-rich remain mega-rich, while Maltese journalist Daphne Caruana Galizia, one of the journalists who broke the Panama Papers story, was murdered in a car bombing.

Galizia’s death isn’t mentioned in “The Laundromat,” but the film focuses on other people who suffered collateral damage because of Mossack Fonseca, particularly Ellen (Meryl Streep), a widow who loses her husband in a tour-boat accident. When the insurance company stiffs her and the boating company, she begins following the threads of shell companies and purchasers to find that, essentially, there’s no insurance company, just a bunch of phony corporate entities in the Caribbean that disappear whenever payouts are due.

Soderbergh and Burns also weave in an African billionaire (Nonso Anozie, “Zoo”) attempting to bribe his daughter to stay quiet about his infidelity and a European businessman (Matthias Schoenaerts) engaged in questionable business with a Chinese plastics mogul (Rosalind Chao). But the film keeps coming back to Mossack (Gary Oldman) and Fonseca (Antonio Banderas), who talk to the camera about how their law firm works and what services it provides. (How cringe-worthy is Gary Oldman’s German accent? It clangs before you even see him, when he and Banderas begin the film narrating from off-screen.)

Despite the film’s best efforts, none of these interlocking stories achieve any kind of dramatic traction. One imagines Soderbergh, in “Erin Brockovich” mode, turning one of these subplots into an interesting movie on its own, but “The Laundromat” zigs and zags too frequently for us to care all that much about any of them. And if the narrative portions don’t work, the explanatory bits featuring Banderas and Oldman have nothing from which to hang, and they too fizzle.

And whatever emotional resonance Streep achieves as an angry widow is undone by the decision to cast her as a Mossack Fonseca secretary, complete with enormous fake nose and ridiculous Spanish voice. (This isn’t the movie’s only weird bit of cross-racial casting, as Oldman briefly pops up as Schoenaerts’ Chinese cab driver for no particular reason.) The film ends with Streep giving a monologue, first as the secretary, then as Ellen, then finally as herself — peeling off pads and wigs all the way — and it’s a jarring bit of show-offery from a performer who should be above such flash. We know you can get out of a safe at the bottom of the river, Houdini; there’s no need to perform card tricks for us.

As tossed-off as the concept feels here, Soderbergh at least runs a tight ship for the production itself; casting director Carmen Cuba has to fill a lot of roles that have only one or two scenes to make an impact, and the film cannily uses the likes of Sharon Stone, Cristina Alonzo, David Schwimmer and Robert Patrick, among many other familiar faces. Frequent Soderbergh collaborator David Holmes contributes another dynamic score; it’s the most his music has outshined the filmmaking since “Ocean’s 12.”

There’s no question that more people should be familiar with the Panama Papers, and demanding changes to the system that allows these fake shell companies to exist, but even with its heart in exactly the right place, “The Laundromat” isn’t going to move that needle.