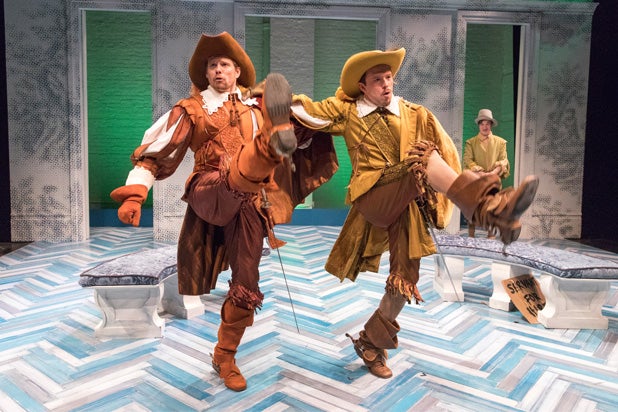 In his one-man show “Laugh Whore,” Mario Cantone looked back in anger at his New York stage debut. He got stuck playing a rustic in one of Shakespeare’s comedies, and night after night in Central Park he could not get the audiences at the Delacorte Theatre to laugh at anything he said. And night after night, he wanted to scream out at them, “You try making f—ing 400-year-old jokes work!”

Early in this French farce, a manservant (Carson Elrod) warns us that the play is in verse. He could have also warned us about the plot, the direction, and most of the performances, because Ives’ clever verse is about the only entertaining diversion offered by “The Liar.”

If Cantone complained about the Bard, what would he think of Corneille’s story? A Trump-level liar (Christian Conn) falls in love with one woman (Amelia Pedlow) but is duped into wooing another (Ismenia Mendes), who is engaged to his childhood friend (Tony Roach). Shakespeare’s rustics are sheer inspiration compared to this dull lot.

The only suspense here is how words end up being rhymed. At this moment on the New York stage, Ives is without a doubt the best wordsmith, that is, until the new revivals of Sondheim’s “Sweeney Todd” and “Sunday in the Park With George” arrive later this season.

Only Elrod and Adam Lefevre, who plays a Falstaffian old codger of a father, have the requisite style and ease with the language. Michael Kahn’s vaudevillian direction delivers one good bit. It comes when Conn and Roach fence without swords while sparring verbally. If only their tongues were as agile as their mime.

When Conn is on stage with Elrod and Lefevre, he manages to be adequate. Whenever he’s on stage with Roach and Pedlow, his voice goes up several decibels to match their screeching, as if being loud and obnoxious equates with being funny.

Kahn’s production does make us empathize with the title character, who confuses two women. I kept confusing Conn and Roach, who look a lot alike, especially when they’re done up in their two-musketeers drag.