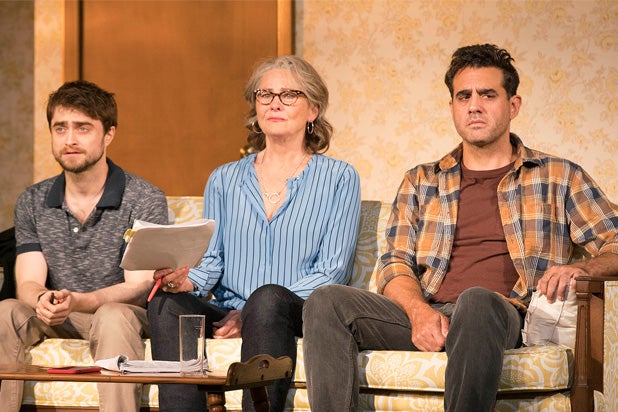 What is the lifespan of a skit? In the case of Broadway’s newest mini-play, that lifespan is 85 minutes plus whatever time it takes you to get home, turn on the TV and watch real political drama on the evening news.

“The Lifespan of a Fact” opened Thursday at Broadway’s Studio 54, and its author credits read like something out of a long-gestating movie script. It’s written “by Jeremy Kareken & David Murrell and Gordon Farrell” and “based on the essay/book by John D’Agata and Jim Fingal.”

There’s a lot to unpack there, but let’s stick to the word “essay,” which, we are quickly told in this play, is very different from an “article,” which is fact-driven and therefore an inferior form of writing. An essay, on the other hand, lets you play with the facts as long as you end up telling “the truth.”

The characters Jim (Daniel Radcliffe) and John (Bobby Cannavale) do battle over John’s essay, about to be published in an upscale magazine, which takes major liberties with the facts of a teenager’s suicide in Las Vegas. Jim is the magazine’s fact-checker, and he strenuously objects to John’s writing that there were 34 strip clubs in the city (when there are only 31), his calling a bar Bucket of Blood (when its name is the less colorful Boston Saloon), and his turning another teen’s suicide into a hanging (when, in fact, she also jumped to her death).

The list of inaccuracies goes on and on, and Jim and John argue via email, phone and in person from Wednesday to the Monday morning deadline. Their editor Emily (Cherry Jones) plays referee.

To explore the truth of this situation for a moment, the real D’Agata and Fingal actually spent seven years arguing over the writer’s 15-page essay for The Believer after it had been rejected by Harper’s Magazine for obvious reasons. Theatergoers can be thankful that Kareken & Murrell and Farrell had the good sense to play with the truth of that time frame with their stage play.

The playwrights attempt to even the playing field between the writer and the fact-checker by turning Jim’s overly conscientious approach into a liability, especially when he questions a line in the essay “the wind was blowing hard but did not come in my house.” Did that happen or didn’t it?

“Lifespan” very quickly lets us know that D’Agata is “one of America’s most significant living writers,” large chunks of that Believer essay are read aloud to us, and Emily calls it “a prestige article,” “my legacy piece,” “a moving, meaningful, and rare piece of writing,” and a “shattering and sure-to-be-award-winning piece.” All this praise doesn’t justify John’s approach to the truth. It simply turns “The Lifespan of a Fact” into a vanity project for D’Agata.

Having been a magazine-newspaper editor for over 40 years, and having done a lot of writing, fact-checking and copy-editing along the way, I didn’t buy John’s argument that he wrote “the truth” because the suicide’s mother told him “this is my son!” Since when does a journalist — or essayist, if that makes a difference — let a subject of his writing read the text pre-publication? I could only wish that one day the John character had to face not a fact-checker but a libel lawyer, who would have squeezed the literary flatulence out of him in well under 85 minutes.

Beyond the nonsense that “The Lifespan of a Fact” makes of journalism, there is the little dramatic problem that none of the three characters grows or develops in the course of 90 minutes.

Some character frisson might have been created if director Leigh Silverman had switched the roles, with Radcliffe playing the arrogant, conceited, boorish, and utterly obnoxious John and Cannavale playing the sensitive, persnickety, conscientious and utterly adorable fact-checker. Instead, the two actors are typecast. Jones’ portrayal makes a very good case for why her character’s magazine is losing its readership and deserves to.