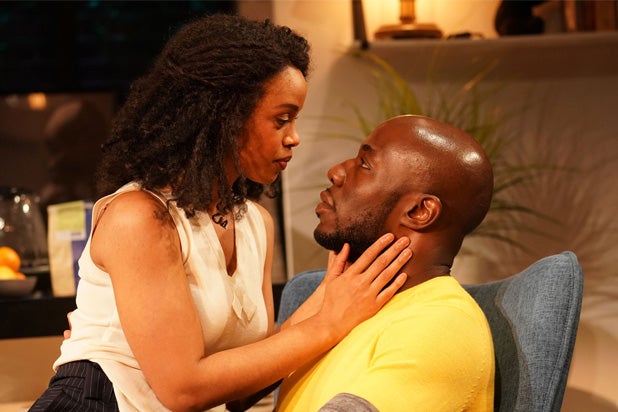 Loy A. Webb gives herself only 70 minutes to tell the story of a young Chicago couple who are on the verge of getting married only to see those romantic dreams shattered over an argument regarding concert tickets.

In “The Light,” which opened Sunday at MCC’s brand-new Robert W. Wilson Theater Space, is a fast, sometimes funny, and ultimately furious 70 minutes, and what makes it all the more remarkable is that Webb tells the story of Rashad and Genesis in real time.

There’s such a thing as guilty pleasure in the theater. Webb’s “The Light,” as directed by Logan Vaughn and performed by McKinley Belcher III and Mandi Masden, gives us something far more unusual. It’s what could be called guilty unease.

The Wilson Theater Space is intimate, and Kimie Nishikawa’s scenic design for “The Light” positions the audience just beyond the sofa and chairs in Genesis’ modern, upscale living room. The actors’ space is our space, and we’re all breathing the same charged-up air. Vaughn delivers such controlled performances from Belcher and Masden that we’re not so much watching them perform as eavesdropping on their scorching dispute.

“The Light,” which first played last fall at Chicago’s New Colony, is not one of those two-handers that leisurely takes its time to get started. Early on, Masden’s Genesis complains about a female teacher at her Chicago charter school, where she is principal, who has taken the side of Brett Kavanaugh, against assault accuser Christine Blasey Ford, in the recent Supreme Court confirmation hearings. (Among other things, “The Light” is very up to date with its chitchat.) Belcher’s Rashad thinks the teacher should be fired, but as his girlfriend points out, that teacher hasn’t broken any rules.

In interviews, Webb has said that she wrote “The Light” in response to the controversy regarding not Kavanaugh but rather the actor and film director Nate Parker, whose “The Birth of a Nation” appeared to be on the fast track to Academy Award glory in 2016 before rape accusations surfaced (he was acquitted at trial).

Parker isn’t mentioned in “The Light,” but Webb creates a vivid character we never meet but who possibly stands in for him and is very much why Genesis refuses to attend a concert to which Rashad has proudly secured some expensive V.I.P. tickets.

Before Genesis makes her secret known, “The Light” races along as one of those polemic plays in the tradition of David Mamet’s “Oleanna.” Webb masterfully gives us the woman’s side, then the man’s side, and back and forth it goes. The dialogue crackles with wit and intelligence. But Webb delves deeper than a staged essay.

“The Light” is structured around two big secrets, one for each character. Genesis’ revelation is a bombshell and a total shock to her boyfriend. But Webb wisely withholds details about Rashad’s own troubled history until Genesis detonates an incident from his past to achieve maximum impact in her argument. Just when we’re totally on Genesis’ side, Webb shifts some of that empathy to Rashad.

Notably, there’s one detail that is never directly addressed but that repeatedly gums up the characters’ romance. Tucked in the edges of the drama is the issue of class, and how Rashad as a firefighter lives a step or two under Genesis’ social and financial position in Chicago. He makes serious misstatements regarding a woman’s allegations, but she patronizes him, saying that he’s a success when, in fact, he deservedly harbored far greater ambitions for himself.

From #Me Too to Black Lives Matter, “The Light” plays host to a number of issues, but what’s really at the core of Webb’s play is the eternal battle of the sexes. Rashad and Genesis can’t help but talk around each other’s pain.