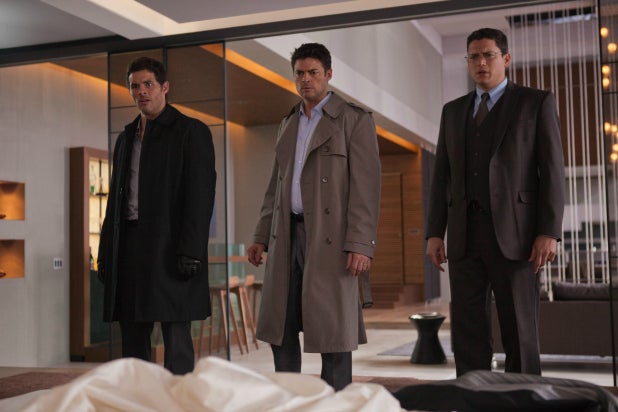 If you were to unleash a naughty, baroque prankster like onto the grimly joyless adulterous goings-on of “The Loft,” you might wind up with the kind of delicious trash this thriller so wants to be. Filmed in blue-steel noir-in-color and featuring performances in which everyone’s either mumbling or screaming, however, this silly chamber piece about sex and murder elicits only yawns, interrupted by the occasional unintentional giggle.

A remake of a 2008 Belgian film, this movie does occasionally have that awkward feel of something that’s been translated from one language into Esperanto and then finally into English.

Also Read: Universal Pulls ‘The Loft’ From Calendar, Gives ‘As Above, So Below’ Its Release Date

We begin with a beautiful blonde found dead in bed in a loft that belongs to five friends, none of whom seem like they would have any reason to spend time with the other four. The loft is in a sleek skyscraper designed by architect Vincent (Karl Urban), who convinces boozy lech Marty (Eric Stonestreet, “Modern Family”), tightly-wound Luke (Wentworth Miller), laid-back therapist Chris (James Marsden) and hot-tempered Philip (Matthias Schoenaerts) to share with him what novelist James Ellroy would subtly call “a hot-sheet f—kpad.”

As the police question the men and investigate the murder, we begin to unravel the deceptions that all of these guys have perpetrated on their wives, the identity of the dead woman and the lies that these alleged pals have all told each other. The more we get to know this crew, the harder it is to care about any of them; the men are all portrayed as lecherous horndogs, while the women are either shrews, ice queens or self-professed whores.

Screenwriter Wesley Strick (remakes of “Cape Fear” and “Nightmare on Elm Street”), adapting Bart de Pauw’s screenplay, commits one C-minus-in-Screenwriting-101 sin after another, like introducing characters with lines that include “Here comes Mimi — your wife,” and “Hey! My big brother!” while also crafting a Big Twist that’s admittedly hard to predict but also utter nonsense.

Cinematographer Nicolas Karakatsanis (who previously shot the Schoenaerts vehicles “The Drop” and “Bullhead”) achieves an appropriately grim palette for these dirty deeds, but he’s way too enamored of shooting the interrogation scenes by filming an actor in profile in extreme close-up with a fish-eye lens, then doing a 180 of the actor’s head across his face. And then doing it again. And again.

Director Erik Van Looy, who made the original film, doesn’t help his actors much here. (Certainly not the foreign ones, as no one apparently noticed when Urban’s or Schoenaerts’ native accents popped out in moments of duress, despite the fact that they’re playing Americans.)

Miller and Stonestreet overplay repression and brashness, respectively, and the actresses playing the wives are mostly left to glower, particularly poor Rhona Mitra, whose only direction seems to have been to emulate the Sphinx as much as possible. Kali Rocha (“Space Station 76”) has a little fun giving Stonestreet as good as she gets, but generally speaking, the most any cast member will get out of “The Loft” in the long run was a trip to beautiful Brussels and New Orleans.

Whether this thriller worked any better in its native tongue, I cannot say, but this American version is like eating a Belgian waffle made entirely out of hot dog buns.