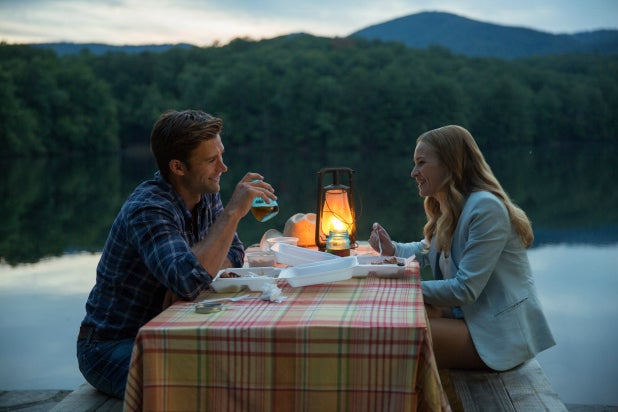 “The Longest Ride” offers two Nicholas Sparks movies crammed into one, but wouldn’t you know it, as it’s the less-interesting one that gets the lion’s share of screen time. Fans of Sparks’ sappy trademarks — manly men wearing distressed flannel shirts and driving weathered pickup trucks, bright-eyed women with smarts and careers but lacking a manly man in a flannel shirt to make their lives complete — will come away satisfied, but the rest of the world may find all of this less than enchanting.

The A-story falls into what a filmmaker friend of mine calls “pretty white people with problems.” Luke (Scott Eastwood) is a champion bull rider whose career gets sidetracked after a nasty bucking leaves him injured. Gets back on the bull a year later, he locks eyes with college senior Sophia (Britt Robertson, “Under the Dome”), who was dragged there by her sorority sisters. Manhattan-bound after her graduation from Wake Forest University, she at first ignores Luke’s invitations to dinner before eventually succumbing to his charms.

On their way home from their date, they spot a car that drove off the road; Luke carries driver Ira Levinson (Alan Alda) to safety, while Sophia rescues a box on the passenger side that contains decades’ worth of Ira’s letters to his late wife, Ruth. To help him recover, Sophia reads the correspondence aloud to the hospitalized man, leading to the B-story, flashbacks of young Ira (Jack Huston, “Kill Your Darlings”) courting Ruth (Oona Chaplin, “Game of Thrones”) in 1940s North Carolina, where Ruth’s family settled after fleeing Europe.

Director George Tillman Jr. (“Men of Honor”) and screenwriter Craig Bolotin (“Black Rain”), adapting Sparks’ novel, relegate Ira to the role of Magical Geezer, whose main importance to the story is teaching Luke and Sophia important lessons about life and love. As it turns out, however, the saga of Ira and Ruth feels more vital and has more at stake than whether or not Luke will stop bull riding or if Sophia will give up her ambitions in the art world to stay in North Carolina.

The Levinsons, after all, had to contend first with World War II and later with their inability to bear children, even though Ruth wanted a big family. As a schoolteacher, she poured her desire to parent into taking care of her students, particularly one impoverished child, the culmination of whose story provides “The Longest Ride” with its only genuinely affecting moment. (Not among the couple’s problems was anti-Semitism, since this film apparently exists in the same cuckoo dimension as “The Identical,” where no such bigotry existed in the mid-century Deep South.)

I found myself rewriting practical solutions to Luke and Sophia’s barely-there problems: Settle in Marfa or some other Texas art colony where you can both pursue your passions. Or better yet, let Sophia move to New York City, where the chiseled Luke could easily get a gig as an underwear model: The real love story in “The Longest Ride” is between Eastwood and David Tattersall’s camera, which spends so much time leering over the actor’s cheekbones, abs and other attributes that you begin to wonder if someone’s going to call Human Resources. With that much objectification going on, Robertson is left standing to the side waiting for some attention from either her co-star or her cinematographer.

Eastwood is, of course, Clint’s son — the profile’s a giveaway, to say nothing of the incipient crinkles in both his voice and his forehead — but he’s not the only legacy in the cast. Huston is the grandson of John and Chaplin is the daughter of Geraldine and the granddaughter of Charlie. The latter two give performances that go a long way toward making you wish their story had been the focus of the film. (The 79-year-old Alda, talented as he is, doesn’t quite sell the fact that he’s playing a character who has to be at least 93.)

Overall, “The Longest Ride” feels cloying and contrived; the only time it’s unpredictable is when the plot takes a turn so utterly unbelievable that, admittedly, no one would see it coming. It’s the kind of movie where someone who loves contemporary art in the 1940s (as Ruth does) is visionary and progressive but someone who loves it today (as Sophia does) is a dupe and a sucker.

If you’re moved by Ruth and Ira’s lifelong love of art, check out the 2008 documentary “Herb and Dorothy,” about a real-life couple who amass a collection comparable to the one featured in “The Longest Ride.” And if you want to see a genuinely moving romance based on a Nicholas Sparks novel, well, you may just have to dust off that DVD of “The Notebook” yet again.