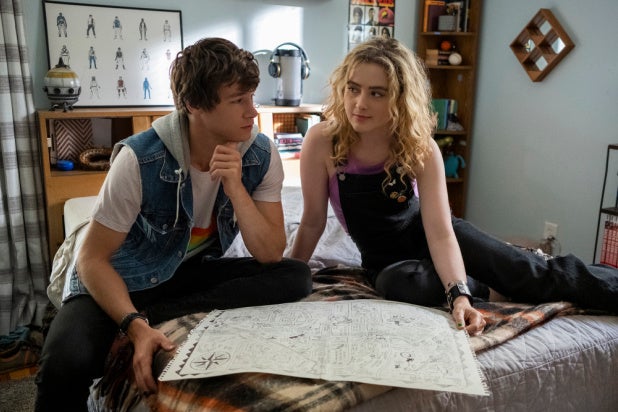 There’s a grammar-school-friendly version of the Sondheim musical called “Into the Woods, Jr.,” which erases all of Act Two (except “Children Will Listen”) so you can have the storybook charm without the sex or death. Amazon’s “A Map of Tiny Perfect Things” is essentially “Groundhog Day Jr.,” turning the idea of being stuck on the same day into a YA romance.

“Groundhog Day” was by no means the first story to use the idea of people in a temporal anomaly as a metaphor for being in a rut, but it launched its own sub-genre that includes Sundance hit “Palm Springs,” the Netflix series “Russian Doll,” the horror franchise “Happy Death Day,” and even the made-for-TV holiday film “12 Dates of Christmas.” All that’s left for “The Map of Tiny Perfect Things” to mine is a narrative that places teens in the center of the universe and allows them to know more than anyone else in the room. At first, anyway.

That’s probably the core of the film’s appeal, and it does have appeal, even if this is ground that’s been trod over with some frequency in recent years. The charming and charismatic leads go a long way toward making the déjà vu here more palatable, if not entirely forgivable.

When we first meet Mark (Kyle Allen, “All My Life”), he’s already been reliving this day enough times to know the beats, from what words his dad Daniel (Josh Hamilton) needs to complete a crossword puzzle to when to stop a guy on a sidewalk from stepping into the exact spot where a bird will poop on him. The first time we see Mark head to school is a nifty Rube Goldberg-ian sequence of vehicles and unobtrusive assists to passers-by, exquisitely crafted by director Ian Samuels (“Sierra Burgess Is a Loser”) and editor Andrea Bottigliero.

Part of Mark’s day is keeping a beach ball from knocking a cute girl into the pool, although we see that, even with repeated efforts, he hasn’t quite figured the right things to do or say to hold her interest. And then one day, Margaret (Kathryn Newton, “Freaky”) catches the beach ball instead, tearing off in a car before Mark can catch up to her. Several “days” later, he does, and confirms that she, too, is trapped in this loop alongside him.

Margaret doesn’t seem particularly interested in escaping the day, and even less so in pursuing a romantic relationship with Mark. (She observes that, just because they’re “stranded” together, their companionship doesn’t necessarily have a deeper meaning.) As Mark tries to win her over, he and Margaret begin mapping out all the tiny perfect moments that transpire over the day, which might or might not lead them both to move on.

Adolescent problems can certainly carry the same weight as adult issues, both in real life and in literature, but novelist Lev Grossman, adapting his own short story, makes Margaret’s burden (one that many viewers will see coming from miles away) much more substantial than Mark’s – he basically needs to be less selfish and more compassionate to his dad and sister Emma (Cleo Fraser, “The Unicorn”). For both characters, it feels like the universe is overplaying its hand in having put them in this situation, and the eventual resolution comes off as both overexplained and underestablished.

Still, Newton creates a meaningful character who’s too smart and too self-possessed to be anyone’s manic pixie dream girl, and Allen makes a mark as an amiable Everyman, albeit the kind of “regular guy” you only ever see in the movies, who’s one hair-comb and wardrobe change away from being a model. Hamilton clearly knows he’s a supporting player here, but he imbues his handful of scenes with genuine compassion and empathy.

Also Read: 'The Magicians' to End on Syfy After Current Season

Cinematographer Andrew Wehde (“Eighth Grade”) stands up to the challenge of having to shoot the same specific actions at the same time of day, over and over and over again, and the production team has created an ideally cozy town, one that’s small enough to allow Margaret and Mark to map out all the day’s highlights yet big enough to offer both a bustling main street and a bucolic forest and lake just outside of town.