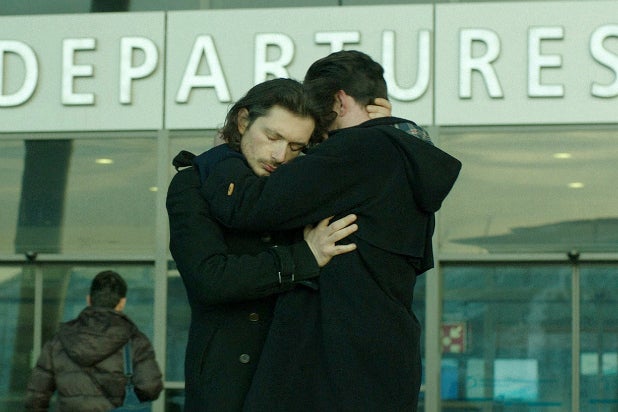 The problem with “The Marriage,” a well-meaning but structurally lopsided first feature from Yugoslavian director Blerta Zeqiri, is that the marriage plot from the title is so much less interesting than the love plot at its core.

This is a film that takes place in a cold, snowy climate, and the main male character, Bekim (Alban Ukaj), and his fiancée, Anita (Adriana Matoshi), are bundled up in the first scene as they wait outside a center for missing persons. (Anita’s parents have been missing for over 15 years.) When Bekim and Anita enter the center, we see people placing long-stemmed flowers down on numbered segments that carry the found bones of their loved ones.

The Kosovo War of the late 1990s hangs over this narrative, because any story set in Yugoslavia has to deal with it in some way. But the character of Anita in “The Marriage” does not seem affected in any way by the trauma of that war or the loss of her parents. She is somewhat bland and superficial and an easy laugher, and we spend an inordinate amount of time with her as she picks out her wedding dress.

We also spend a long time with Anita as she hangs out with Bekim and his old friend Nol (Genc Salihu) at the bar that Bekim runs. Nol went to live in Paris and he has become a musician of some renown. He keeps hinting that he is in love and that it is a “Romeo and Juliet” sort of situation. “Is Juliet a Serb?” Anita asks, in her slightly ditzy way. She tells a long joke about a copulating couple that either loses something in the subtitle translation or is supposed to be aimless and bad.

This scene in the bar is very flat, as is a flashback scene where we see Anita hanging out with her female friends and meeting Bekim for the first time. (Apparently all of her former boyfriends have been “jug-eared” and so her girlfriends think that Bekim is just right for her.) Bekim and Anita arm wrestle on this first meeting, which is not generally the sort of thing men do with women they are attracted to. But Anita remains eternally clueless here.

Back in the present, Bekim turns down two guys who want to throw a party at his bar for “the LGBT community,” and Ukaj makes certain that we see how much of Bekim’s anger is based on repression and a feeling of helplessness.

Up until this point, Anita has been an innocuous character, but she edges her way into very unsympathetic territory when she sends Bekim a text message of a pregnancy test that she downloaded from the Internet just to scare him.

“The Marriage” suddenly comes to life in the present-day scene where Bekim makes love to Nol after Nol is gay-bashed. (The thugs who beat Nol up say they must “exterminate” him, and they talk about Hitler.) When Bekim takes Nol home from the police station after this assault, they immediately have to go to bed together. The beautiful thing here is that Nol has to be treated very gently at first because of the wounds on his back, but once they get going it seems as if the physical damage Nol has suffered disappears for him because he loves having sex with Bekim so much.

There is a super-charged flashback to when Bekim and Nol first knew each other during the war, when Nol was a tenant in a house run by Bekim’s mother. We see them singing “They Can’t Take That Away from Me” together, and Bekim is like a totally different person here: wearing an ornate red shirt, happy and relaxed, and even doing a loving imitation of Louis Armstrong. Later that night, Bekim and Nol laugh about the fact that the war has given them a cover for their romance, and they would like the war to continue so that they can go on loving each other.

In these two scenes, where Ukaj and Salihu display a great deal of chemistry, it becomes clear that “The Marriage” should have been about the love between Bekim and Nol in wartime followed by a brief coda where Bekim forces himself to get married. Nothing having to do with either Anita or the marriage itself is as compelling as the love affair between these two men.