Nielsen released its ratings for the third season of “The Marvelous Mrs. Maisel” on Tuesday, revealing that an average of 3.2 million viewers tuned in to the new batch of episodes within the first seven days of their release.

That number is up by 60% over Season 2, which saw an average minute audience of 2.0 million viewers across its first seven days.

In terms of first-day viewing, the Season 3 premiere was watched by 2.1 million viewers, more than double the number of people who tuned in to the first episode of Season 2 on the day of its premiere. Season 3 as a whole had an average of 606,000 people watch on premiere day, which is also up from the season prior.

“Maisel’s” premiere-episode viewership is, according to Nielsen, the best showing for any Amazon Originals on the day of release. Compared to Mrs. Maisel’s 2.1 million average minute audience, the first episode of “Jack Ryan” Season 2, brought in about 2.06 million viewers on Nov. 11.

In the weeks since the Season 3 premiere, “Maisel” has also picked up a number of accolades, including a pair of Golden Globe nominations, as well as recognition from critics’ groups and Hollywood guilds. The show was also officially picked up for a fourth season last month.

Amazon famously doesn’t release ratings for its original series, but Nielsen has been measuring viewership for streaming content for a few years now. Its numbers represent an average of how many U.S. viewers tuned in per minute across the episode’s entire runtime. Nielsen also only accounts for set-top box viewings; mobile, tablet and laptop views are not included in its metric.

See the full ratings breakdown of “The Marvelous Mrs. Maisel” Season 3 below. 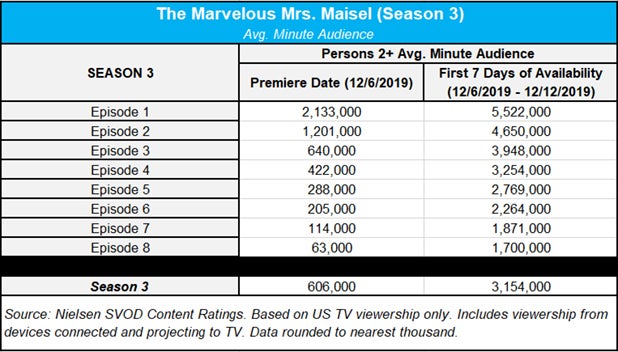