(Warning: This post contains spoilers from Wednesday’s episode of “The Masked Singer.”)

“The Masked Singer” cut another competitor from its Season 6 lineup on Wednesday’s episode, revealing the identity of the Hamster contestant by the end of the hour.

But before viewers learned Hamster’s secret identity, he and the other remaining Group A contestants — Skunk, Pepper and Bull — along with newbie Wildcard Jester, all performed for host Nick Cannon and “Masked Singer” judges Ken Jeong, Jenny McCarthy, Nicole Scherzinger and Robin Thicke, and guest panelist Leslie Jordan.

In the end, it ended up being Hamster who got the fewest votes from the audience and judges, despite enthusiastic praise for his performance of Luis Miguel’s “Sabor a Mí,” which he sang entirely in Spanish. When the mask came off, it was revealed that actor Rob Schneider was the celeb underneath the fluffy rodent costume. 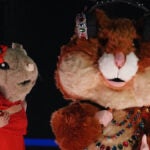 Before Hamster was unmasked as Schneider, only McCarthy correctly guessed his identity. Thicke picked Cheech Marin, Scherzinger said Gabriel Iglesias, as did guest judge Jordan, and Jeong guessed Will Ferrell.

Readers can find TheWrap’s interview with Schneider about his time on “The Masked Singer,” including how excited he is for Adam Sandler to see it, right here.

Still in the running for a “Masked Singer” win are Group A’s Skunk, Bull, Pepper and Jester, along with Group B’s remaining lineup of Queen of Hearts, Banana Split, Mallard and Caterpillar. Fans will just have to keep waiting for the arrival of the final Wildcard contestant, Beach Ball.