In this exclusive sneak peek at Wednesday night’s episode, the show’s season finale, Thicke adds up all the clues and comes up with a definitive answer on who he thinks The Prince is (the one in the frog costume).

Check out the clip below to watch Thicke layout the evidence.

Heading into the season finale, Firefly, Ringmaster and The Prince are still in the game. They’ll compete head-to-head to take home the crown for Team Good. 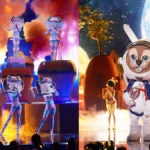