(Warning: This post contains spoilers for the Season 5 finale of “The Masked Singer.”)

The game-changing fifth season of “The Masked Singer” crowned its winner Wednesday night, and in doing so, revealed the identities of not just the victor, but the runner-up contestant and third-place competitor. And it turns out the celebrities behind the Piglet, Black Swan and Chameleon masks are all professional singers.

The hour began with Season 4 winner LeAnn Rimes performing her hit “How Do I Live,” accompanied by Piglet, Black Swan and Chameleon lending their own signature vocal stylings.

Then we got to Nick Cannon celebrating the good times that led to this finale, before it was time for the three remaining contestants to perform one last time in front of judges Jenny McCarthy, Ken Jeong, Nicole Scherzinger, Robin Thicke and Rimes, who served as guest judge. 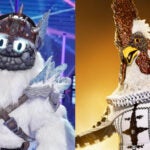 For their final performances, Chameleon rapped “Gangsta’s Paradise” by Coolio ft. LV, Black Swan belted out Michael Bolton’s “How Am I Supposed to Live Without You” and Piglet sang Journey’s “Faithfully.”

Then, as all good things must come to an end, the panelists and audience voted for who they wanted to see win the Golden Mask Trophy. The contestant with the most votes was Piglet, who was crowned the winner and then unmasked to reveal singer and actor Nick Lachey. Second place went to Black Swan, who turned out to be singer JoJo. Chameleon came in third and was unveiled as rapper Wiz Khalifa.

The judges’ guesses for Chameleon were Khalifa, Gucci Mane and 2 Chainz. For Black Swan, they thought JoJo, Normani, Monica and Demi Lovato. And before his unmasking, the panelists believed Piglet was either Lachey, Brian Littrell or Jeremy Renner.

“The Masked Singer” will premiere its sixth season this fall on Fox.