Many movies feel like the bastard children of a thousand suggestions from studio executives, but “The Meddler” seems like it had its script rewritten by a pushy mom, or perhaps the Buttinsky Anti-Defamation League.

Somewhere along the way, the film’s central character — a widow who compulsively insinuates herself into the lives of strangers while avoiding her own grief at her husband’s death — became a pleasant, helpful person whose interferences are welcomed and, ultimately, greatly beneficial to all involved.

Everyone’s so damn happy and grateful to have been meddled with that it undercuts both the comedy and the drama in this film from writer-director Lorene Scafaria (“Seeking a Friend for the End of the World”), although she does at least provide a platform for Susan Sarandon to exercise her comic chops (and to look great) in a lead role.

As a side note: There’s a thesis on aging in the cinema that’s waiting to be written based on the current crop of movies in which actors over 65 all want their own Liam Neeson kill-everyone franchise — Kevin Costner alone has made two or three attempts in this direction — while actresses of the same age make movies about characters who just want to feel relevant and not be ignored by the world. (Recent examples include Sally Field in “Hello My Name Is Doris” and Blythe Danner in “I’ll See You in My Dreams.”)

Sarandon stars as Marnie, a widow who relocates to Los Angeles from the east coast to be closer to her TV-writer daughter Lori (Rose Byrne). And for Marnie, “being closer” means leaving a constant barrage of messages and texts about every single thing she’s doing, with much of those activities revolving around L.A.’s outdoor shopping mall The Grove and the Apple Store there.

Lori, depressed over her father’s death and her recent break-up with actor Jacob (Jason Ritter), manages to keep Marnie at arm’s length, even decamping back to New York herself for the filming of a pilot she wrote. With Lori not responding, Marnie devotes her meddling energy to strangers, organizing and paying for a wedding for Lori’s lesbian pal Jillian (Cecily Strong), and encouraging her Genius Bar buddy Freddy (Jerrod Carmichael, “Neighbors”) to return to school, even driving him to classes one night a week. 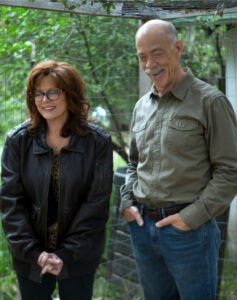 When Marnie impulsively offers to cover the costs of Jillian’s wedding or to be Freddy’s school chauffeur, we tensely await the moment in which she has overcommitted herself and will have to face the consequences of disappointing people. But no, in the world of “The Meddler,” Marnie apparently has infinite sources of time and money, and she winds up as a fairy godmother who makes the dreams of others come true, while she gets to find love in the form of ex-cop Zipper (J.K. Simmons).

(There’s even a moment where Marnie cracks a code involving an uncommunicative old woman in a hospital that’s so overdone that you think the movie is just going to give her healing powers, because why not.)

Somewhere along the way, Marnie and Lori learn to face their grief, but any sort of personal growth takes a back seat to good deeds and consumerism. (I kept waiting for some level of irony to Marnie’s intense affection for The Grove, but I never got it.) The oppressively sunny cinematography from Brett Pawlak (“We Are Your Friends”) underscores the film being an advertisement for seniors to be both active and actively interfering in other people’s business.

Sarandon, at least, is fun to watch, even when it’s clear that the movie isn’t all that interested in her character’s hidden sadness, while Byrne gets to reveal a different side with a low-energy, angry role. Film critic Witney Seibold coined the term “Flawless Rescue Stud” as the opposite of Nathan Rabin’s infamous “Manic Pixie Dream Girl,” and the former is pretty much all Simmons gets to play, in a part that has “insert Sam Elliott here” written all over it.

“The Meddler” is a movie that moms everywhere will no doubt enjoy and take to heart, but their children may come to regret having taken them to see it. Although if they see it at The Grove, they’re right across from where you can buy one of those iPads, and then you could walk down and get one of those really good donuts at the Farmer’s Market, but only one because my cholesterol and everything, and then stop into Monsieur Marcel from some imported olive oil, because that kind you have at the apartment looks to me like it expired, and then we could…

40 Actresses in Their 40s Who Are Still Conquering Hollywood (Photos)

From Amy Adams to Reese Witherspoon, these actresses aren’t letting four-plus decades slow down their career

Celebrate the leading ladies of Hollywood who are still killing it in their 40s.