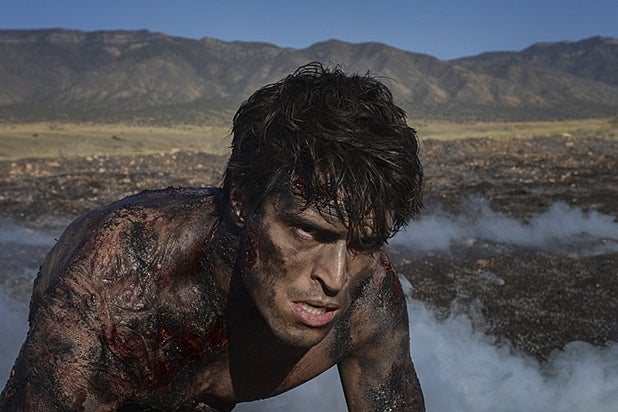 Resurrection is a major theme in the Bible.

Death and rebirth also drive the plot on the captivating new end-of-days drama “The Messengers,” which debuts Friday, April 17 on The CW. In it, five strangers die and come back to life after a meteor crashes in Albuquerque, New Mexico.

Interestingly enough, it’s also after the quintet’s second life that the “The Messengers” gains momentum and focus. Prior to that, the first 10 minutes of the series is a blur of table setting where at least seven characters are frantically introduced in various locations — a preacher in Houston, a mother in Tucson, Arizona, and a swim-team nerd in Little Rock, Arkansas.

Also Read: ‘The 100’ Star Marie Avgeropoulos on Season 3 Hopes: ‘I Got the Sword – I’m Still Waiting for a Horse’ (Video)

It’s also during those first few minutes that the show comes across as just another alien-invasion type program where body snatchers from a distant galaxy hijack the lives of unsuspecting but impressively diverse innocents. The fact that the meteor crashes at the Trinity Site — where the first nuclear bomb was detonated — further supports that presumption.

Thankfully, there is a lot more to “The Messengers” than that tired trope. Instead of aliens, the dead are still themselves but are resurrected with angelic abilities.

From then on, Peter (Joel Courtney, “Super 8”), an Arkansas foster kid and swim nerd who contemplated suicide in the past, not only has the strength to defeat his bullies but angel wings and a stronger sense of purpose.

The same 180 happens to Erin (Sofia Black-D’Elia, “Gossip Girl”), an abused woman and mother who once struggled with alcoholism but now has the power to heal.

There’s also Vera (Shantel VanSanten, “Gang Related”), a radio astronomer with a secret past; Raul (JD Pardo, “Revolution”) an undercover federal agent in a Mexican drug ring; Joshua (Jon Fletcher, “Pan Am”) a Bill Clinton-esque evangelical preacher with an atrocious father/boss; and Rose (Anna Diop, “Everybody Hates Chris”) a nurse who has been clinging to life in a coma for seven years.

But the most fascinating character is the one known only as The Man (Diogo Morgado, “Sol de Inverno”), an unnervingly handsome Devil and smooth talker who has deathly and destructive plans for Rose and the resurrected five.

It’s the tension between The Man and Vera — and eventually the others — that gives the show an air of mystery and suspense. Will these messengers prevent the apocalypse or cause it? How easily will the five be tempted? And why does The Man want Rose dead and why can’t he kill her himself?

Other dangers abound as Erin tries to flee the abusive tentacles of her ex-husband (Lane Garrison, “Prison Break”), a power-tripping cop with a penchant for bombastic confrontations. Meanwhile, Raul goes on the lam after things go wrong on the job and Peter runs away when fisticuffs with an antagonistic classmate go too far.

These details, as well as a range of compelling and serviceable performances, help to make this ensemble sympathetic and investment worthy. This is especially true for Courtney, who charmingly crafts Peter as an underdog we can all root for.

That said, there is a moment where it seems like the writers had a chance to make Peter gay and for whatever reason decided against it. Time will tell if the motivations behind making him straight were inspired by plot development instead of societal and religious bias.

In the end, “The Messengers” is an appealing and entertaining cross between “Heroes” and “Supernatural” and has the potential to be just the hit The CW needs and viewers deserve.