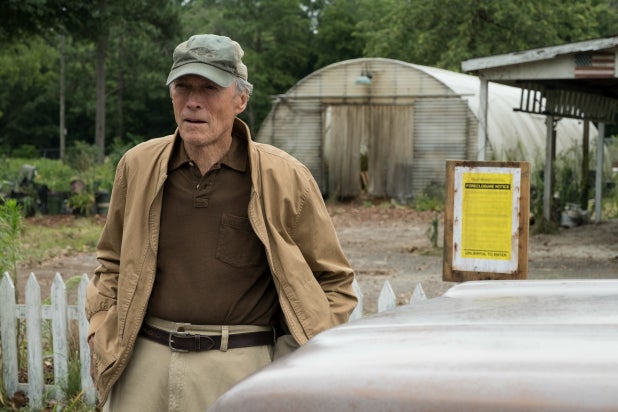 American movies are so addicted to well-intentioned wrongdoing that you’d think income-redistributing thief and ethical assassin were common career choices. But Clint Eastwood, who has mined our darker impulses for exhilarating pleasure for over half a century, knows how to tell an entertaining crime saga that keeps the pain, confusion, and moral quandaries front and center. Which makes “The Mule,” his 38th feature behind the camera (and gajillionth in front of it, this time as an octogenarian gardener turned drug courier), another mostly solid notch in a career built on making many of life’s notches feel like scars.

After three docudramas — “American Sniper,” “Sully” and “The 15:17 to Paris” — that amount to a trilogy of sorts about heroism, Eastwood’s return to acting sees him playing a resolutely non-heroic man whose survival choice is fascinating, nonetheless. Eastwood’s character, Earl Stone, is based on a real-life 90-year-old horticulturalist recruited to drive hundreds of kilos of cocaine across America for the Sinaloa cartel before he was caught by the DEA.

In the half-comic, half-dramatic extrapolation of the story as written by Nick Schenk — who scripted Eastwood’s last turn as director-star, “Gran Torino” — Earl is a gregarious, wisecracking day-lily grower in Peoria, Illinois, facing hard times after his business fails. Long estranged from his ex-wife (Dianne Weist) and the daughter (Alison Eastwood) he ignored during his marriage, Earl’s only family connection left is his granddaughter (Taissa Farmiga), soon to marry. When a guest at her pre-wedding party approaches him with a proposal to make money driving, Earl — whose record is spotless after years on the road — quickly accepts.

In an El Paso tire shop, a handful of serious-looking, tattooed Mexican-American garage hands give Earl a suitcase, a burner phone, and dropoff instructions. Before long, Earl is happily flush with cash as the cartel’s best driver, winning the respect of kingpin Latos (Andy Garcia) and the chummy garage gang who affectionately call him “Tata” (grandpa), even as his old-man-at-his-own-pace ways work the last nerve of impatient cartel minder Julio (Ignacio Serricchio, Netflix’s “Lost in Space”).

At its best, “The Mule” is a sneaky disquisition on America as a place in which opportunity and success often carry disquieting undercurrents. Earl preferred work to family, then the internet (so he says) killed his business, so when an organization offers income for a simple task, Earl sees a chance to earn again and to be well-liked. Looking the other way is as American as anything, and if the largesse that reignites his flower business keeps his cash-strapped VFW hall open and finances his granddaughter’s education isn’t questioned by anybody — including Earl himself, often shown in his pickup singing along to the radio like a carefree lackey — then what’s the problem?

Also Read: Is the Box Office Ready for More Spider-Man With 'Into the Spider-Verse'

Well, guilt and death, namely. “The Mule” becomes a better, admirably heavier film when more dangerous stakes, one character’s mortality, and late-in-life regret take over. Those later moments carry a heft that’s absent when Earl is a merry mule cavorting with prostitutes, and Eastwood’s camera is ogling grinding backsides at Garcia’s compound. The circumstance may technically fall within the movie’s “inspired by a true story” tag (the real-life guy did go on cartel-financed vacations), but these shameless scenes only seem “inspired by” an aged male director’s need to prove his abiding virility.

There’s also a clunky engagement with race and subculture, beyond Earl’s built-in familiarity with Spanish speakers as a one-time boss of undocumented migrants, that’s intended to indicate a changing society to an unfiltered senior (Much like “Gran Torino”). When Earl assists a black family with a flat tire, they politely inform him not to use the word “negro.” And yet Earl’s use of “ladies” when meeting a lesbian motorcycle gang is corrected when he learns they self-identify as Dykes on Bikes. (That earns a reaction shot with a rascally twinkle.)

More effectively handled is a non-Earl moment when Bradley Cooper’s DEA agent, on the lookout for the cartel’s top driver, stops an upstanding Latino driver who articulates his nervousness: “Statistically, these are the most dangerous five minutes of my life.” Though he’s not mistreated, the few seconds of this rattled bystander struggling with his seatbelt afterward is the kind of empathetic detail about today’s America that few filmmakers telling a cops-and-criminals story would have bothered showing.

Eastwood’s on surer ground overall, though, when the walls start closing in on Earl and a reckoning (both figurative and literal) is at hand. Some may see Cooper as underused, but his sturdy appeal informs his two key exchanges with Earl, both centered on the consequences of a badly prioritized life. Eastwood and Weist also do memorable work laying out the recriminations and ruefulness of a failed marriage in a mere handful of scenes that reinforce both her excellence and how underrated he’s always been playing conflicted leading men.

Earl is, on some level, the perfect part for the 88-year-old legend, long a master of sneaking uncomfortable truths about life and finality into well-oiled, enjoyable packages. “The Mule” may not always stand with his most resonant work, at times betraying the awkwardness of someone set in his grizzled ways. But Eastwood’s tilled enough filmmaking soil over the years to know that the same ground can produce daylilies or contraband and that the most involving movies at least try to harvest both.