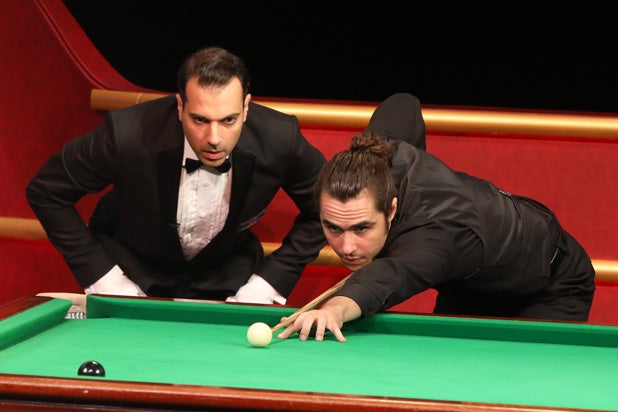 Little surprises lead up to a very big one in Richard Bean’s new comedy “The Nap,” which had its American premiere Thursday at MTC’s Samuel J. Friedman Theatre. This review won’t disclose the Big Reveal, which is right up there with the one in David Mamet’s “House of Games.” However, it’s the many little surprises of the first act that most intrigue and delight.

Those little moments aren’t all in Bean’s text. Even before any actor has spoken, Daniel Sullivan’s steady direction leads us to believe that we’re going to be watching one of those dreary British kitchen-sink dramas in which nothing much happens and every character ends up pretty much where he or she began. Adding to that theatrical dreariness is David Rockwell’s set design for a snooker parlor (think British-style pool or billiards); it almost stinks of too much booze and burnt cigarette butts.

Into this den of despair walks a young man named Dylan (Ben Schnetzer). He even has to put a coin into a machine to turn on the lights, and then spends an exorbitant amount of time setting up the snooker table and ironing its surface (“the nap” is the rough side of the covering fabric). Finally, another character, Dylan’s middle-aged father (John Ellison Conlee), makes a a very belated appearance.

The two men engage in father-son banter, with more than the usual scatological references, and along the way, we learn about Dylan’s own particular hangs-ups regarding a lower-class upbringing and dyslexia. That learning challenge is why he did so badly in school and why snooker is his only road to success in life. Or so he believes. Then his dad has to put another coin in the machine, because the lights go out every 12 minutes.

What holds our attention, besides all the scat talk, are the two performances. Schnetzer and Conlee so completely embody these British blokes that they appear not to be acting. In other words, Schnetzer and Conlee can forget about being nominated for Tony Awards. They never show us their technique.

What begins to suggest a real story only arrives when two officials (Bhavesh Patel and Heather Lind) show up unexpectedly to get Dylan’s urine. He’s from the International Centre for Sports Security; she’s from the National Crime Agency. Who knew they drug-tested for a sport that you can play while smoking? After Dylan has made a trip to the toilet, he’s asked questions about organized crime, gambling, and has he ever thrown a match? Suddenly, Bean is setting things up to tell a very involved story.

More little surprises arrive with the introduction of Dylan’s manager (Max Gordon Moore), his mother (Joanna Day) and her current smelly, drunk boyfriend (Thomas Jay Ryan) who, as opposed to everyone else on stage, are outrageously attired in near comic-opera fashion (costumes by Kaye Voyce). Moore, Day, and Ryan are as wonderfully over the top in their portrayals as Schnetzer and Conlee have been understated.

Dylan’s mother is there to visit because she’s having money problems due to her low-paying job as a waxer of female private parts at a shop run by her old Mob boyfriend who, post-op, now calls herself Waxy Bush.

Clearly, Bean is off and running, and doesn’t disappoint. In one of the most astounding Broadway debuts in recent memory, Alexandra Billings devours the role of Waxy Bush and, without breaking a sweat, nearly consumes every drop of oxygen in the Friedman Theatre. What a first act! From Dylan to Waxy, the careful calibration of upping the comic ante is a marvel to behold.

In act two, Bean treats us to two matches of snooker. According to press releases, the actors are not faking the sport. They play for real, and Bean has written two different endings, depending on who wins. (No, this is not the big surprise of act two.) Better than the matches, which are nicely staged, is Bean’s spot-on parody of sportscasters.

Also terrific is the running joke the playwright gives Conlee’s character. Anyone who has ever experienced a senior moment will identify with this father’s long shaggy-dog digressions as he attempts to remember an actor’s name from a movie he also can’t remember.

Less wonder are all the many malapropisms that Bean gives Waxy Bush. It’s difficult to know what the mangled vocabulary says about her. That she’s pretentious? One thing is for sure. Billings doesn’t need these forced jokes to create an indelible one-of-a-kind bad gal.