(Warning: This post contains spoilers for Sunday’s episode of HBO’s “The Nevers.”)

While Amalia True (Laura Donnelly) and Penance Adair (Ann Skelly) spent the better part of Sunday’s “The Nevers” fighting over whether to follow through with their intricate plan to find the mysterious Galanthi or risk their shot at fulfilling that mission by instead saving the villainous Maladie (Amy Manson) from her public execution, Maladie was busy saving herself.

Yes, the HBO fantasy series created by Joss Whedon pulled a fast one on viewers with tonight’s hour, titled “Hanged.” It ended with journalist Effie Boyle peeling off a wig, makeup and a body suit to reveal Maladie, just minutes after Maladie was hanged in the center of Victorian London. Well, we thought Maladie was hanged — but we now know that woman was actually her missing-toed acolyte Clara (Sylvie Briggs). So that means Maladie has been impersonating Effie ever since just before Clara, disguised as Maladie, was arrested by Detective Frank Mundi (Ben Chaplin) on last week’s episode.

That reveal came “Usual Suspects”-style, when Mundi became confused by the missing toes on the feet of the hanged “Maladie” during the chaos that had ensued when Maladie’s plan to electrocute the onlookers at her hanging was set in motion just after her death. 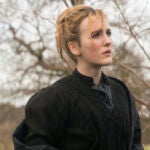 Mundi went back to his office to inspect the photos of the unidentified dead body that he found in the series premiere. He then started to remember comments Effie made about the body in the photo wearing a stylish coat similar to hers and her impassioned op-ed declaring the injustice of Maladie’s hanging. These clues led Mundi to conclude the truth and write in “Effie Boyle” as the name of his Jane Doe. And while Mundi was figuring this out, viewers watched Maladie laugh as she striped off her Effie costume in the madness around her on the streets.

Though Amalia, who took half the Touched team under London to try to communicate with the Galanthi, and Penance, who thinks she and her faction of the orphans failed at their attempt to save Maladie from her public execution, have no idea that Maladie is still alive, we do. And TheWrap spoke with Manson about how “The Nevers” pulled off this five-episode gambit just ahead of next week’s finale of the first half of Season 1.

TheWrap: How early on did you know that you would be playing Maladie/Sarah and Effie Boyle?

Amy Manson: When I first got the role of Maladie, I understood that there was a huge backstory that I had to undertake and I had to understand why she behaves the way she behaves. And the gift was that you saw Sarah, who was Maladie before Maladie, pre-asylum. So it was about myself building a backstory. Was she already insane before she entered the asylum? Or was it her husband maybe poisoning her with mercury just to put her into the asylum for a while? So in that sense, all these questions kind of were answered, because I think by the time she gets into the asylum, she thinks that she’s seen God. She thinks that she’s the chosen one. She sees a spark in the sky and she doesn’t know what it is. And she enters the asylum and she’s with these women spouting this information, but nobody’s there to listen to her. And in that sense, I think they make her mad… Maladie knows what she’s saying, but I don’t think a lot of other people really follow what she’s saying.

And then with regards to Effie, that came out of the blue, I guess, when we got scripts through. So we very much lived script to script, rather than us having a backlog of six scripts to entertain us. So it was great to put everything together because I realized that Maladie was always one step ahead of the game, always one step ahead of everybody else in the show, and probably one of the only honest characters within the show, too. Everything she says is truth verbatim. And so when Effie came around, it was joy. And I guess putting Maladie together, the challenge was because, within Maladie, there’s always a want to become like a socialite, a higher class woman in Victorian London. She reveled playing that game so close to the establishment, so close to Frank Mundi and the people who were actually out to get her. And also at the same time, there’s the element of Sarah living in Maladie. That weak housewife, who Maladie hated so much. So there’s the three of them always there, only one will come out at certain times. And that was the joy of piecing together the puzzle that is Sarah/Maladie/Effie. 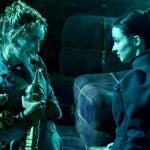 How did you guys pull off that on-screen disguise so that fans wouldn’t piece together that you were playing the character Effie?

The Effie that you saw on screen, there was actually some CGI at play there, because what we found was that the initial Effie disguise was so good that she almost stuck out within this Victorian society. Because I had, like, a really big prosthetic nose, a different eye color, the eyebrows were raised, which we kept and turned a different color. And then I had the most amazing kind of buckteeth, initially. She looked amazing. But in post, they took some of those away, just so she didn’t stick out too much. But the hair and there was also a fat suit that I put on for a bit more weight. And then you see the reveal of how she’s had those enormous breasts, too, which was great to play and great to get into. Just changing shape and look changes you as a person.

I noticed that the character of Effie Boyle is listed as being played by an actress named “Margaret Tuttle” on “The Nevers” IMDb page — a fake name, obviously, that was used to throw fans off, yes?

Yes. They asked me if I minded and, of course, I didn’t mind at all. I don’t mind because of the whole gambit of it.

TheWrap: Maladie, while playing Effie, gives Mundi hints throughout Episode 5 as to the true identity of the body he found in the pilot, a murder that he believed someone else had committed and tried to cloak in Maladie’s style so as to pin it on her. On Sunday, we find out this was Effie Boyle’s body all along, and Maladie was responsible for killing her weeks ago and assuming her identity. This is the murder that Maladie alluded to in Episode 4 when she told Mundi she “only kills angels — mostly,” correct?

After all that Maladie did to orchestrate this revenge at “her” hanging, she’s watching the chaos while still in disguise as Effie and decides to help Harriet up to save her from the stampede. This is before it’s revealed to the audience that this Effie is actually Maladie. Why did Maladie do that, especially given that she hates Amalia and we know she will do almost anything to hurt her after the mysterious betrayal that happened between them?

We spent quite a lot of time deciding, was this the right thing to show an audience? Because that kind of, you know, what I previously said, doesn’t actually make sense in that regard. I think it’s not that there’s a heart there. I think Clara, her acolyte, giving herself for the cause, I think is a weight moment from Maladie. You do see a glimmer of upset there. There is a moment of, ‘Wow, I’m still human. What have I done? What am I doing? Why have I turned into this monster?’ And I think the questions that arise for Maladie within Effie, the true Maladie, are maybe along the lines more of, there’s someone that wants to save me. Penance was there, Penance wanted to save her. And I think that she didn’t expect this to happen. It doesn’t actually go the way that she expected it to happen. So I think in that form, there’s an element of need to know and of remembrance of what it is to fight for friendship — possibly — hope, love. And I think that was a nice moment just to show that maybe there is remorse somewhere or that maybe she could change. And again, that is an element of Sarah coming through Maladie, I think.

The finale of Part 1 of the first season of “The Nevers” airs next Sunday at 9/8c on HBO. 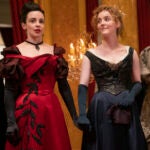