There is a battle going on in “The Night Before,” a bro Christmas comedy directed by Jonathan Levine, between humor based in reality and humor based in self-indulgent references and set pieces. This is a picture that has possibilities, but it lacks follow-through before finally giving in to its own worst impulses.

The premise is neatly established in a swift-moving opening montage: Ethan (Joseph Gordon-Levitt) loses his parents in a drunk driving accident in 2001, and for years afterward his best friends Isaac (Seth Rogen) and Chris (Anthony Mackie) have spent Christmas with him drinking and carousing. During all of these years, they have wanted to attend a secret party called the Nutcracker Ball, but they have never been able to get an invite or even find the location.

In the present day, Chris has become a sports star with a dirty secret while Isaac is about to become a father. Ethan’s music career has stalled, he’s just lost his girlfriend Diana (Lizzie Caplan), and the best he can do for work is a humiliating job passing out hors d’oeuvres in an elf hat. Ethan is forced to smile and make elf faces by his harshly demanding boss, and this scene is rooted in a recognizable reality. It is also pretty bleak.

Isaac and Chris haven’t told Ethan that this year is the last time they want to do the Christmas ritual with him, and so the situation here has the potential for tragedy, but the film soon veers off into that familiar, unstructured sort of modern comedy in which the actors are expected to use scenes as opportunities for sloppy, sexually crude improv.

See Video: Sandra Bullock, Anthony Mackie Admit to Lying to Police During 'Never Have I Ever' on 'Ellen'

Isaac’s grateful pregnant wife Betsy (Jillian Bell) gives him a stash of drugs to have fun with during the night, and so Rogen spends the entire movie doing variations on being stoned out of his mind while making habitual references, both pointed and pointless, to being Jewish. These pay off only in one fairly funny scene where a wigging-out Isaac helplessly disrupts a midnight mass attended by Betsy and her ultra-blond, ultra-Catholic parents. 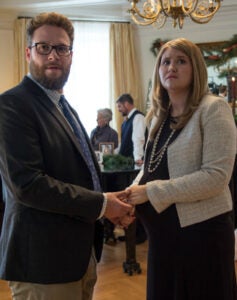 “The Night Before” toggles back and forth between attempts at comedy that are fair-to-middling and a far more promising dramatic reality, like a scene where the three guys play video games in Chris’s old room and quietly talk about what it was like to be friends at school. As Mr. Green, an intense guy who sold the guys weed during their school days, Michael Shannon is funny and unsettling at first because he doesn’t vary his usual dramatic performing style at all. But as Mr. Green keeps appearing, Levine totally spoils the character’s impact by over-explaining him and even making reference to what was so effective in Shannon’s first scenes: “My quiet intensity has that effect on people,” Mr. Green tells Ethan toward the end.

This meta impulse is like a disease that kills the climax of the movie, which takes place at the aforementioned Nutcracker Ball and involves highly expendable cameos from James Franco and Miley Cyrus, both playing themselves and mildly spoofing their own personae in what feels like blatant product placement. It’s as if the makers of “The Night Before” have it in them to make a touching and funny movie but instead throw that chance away by not taking what they’re doing seriously enough. (And yes, the making of a comedy is a serious and exacting business if you want it to be good.)

There’s a moment here when Chris’s mother Mrs. Roberts (Lorraine Toussaint) gently touches her son’s shoulders and says, “I love you,” right after he bails out on doing some charitable work with her the following day. The way that Toussaint says “I love you” and makes that light physical gesture is a powerful thing because you can feel all of Mrs. Roberts’s disappointment with her son as well as the love she still feels for him, or has to feel for him. A first-rate movie of any genre would recognize a moment like that, and build on it, rather than cash in all its chips with gratuitous celebrity cameos and closing scenes that feel more like goofing off than moviemaking.

”The Wolf of Wall Street“ and ”The Secret Life of Walter Mitty“ are among the films competing for Christmas Day dollars this year. Here are the movies have come out on top in the past

10. "Dreamgirls": Bill Condon's 2006 drama about a fictional girl group rising to stardom in the 1960s scored over $8.7 million when it opened on Christmas Day, then won two Oscars at the 79th annual Academy Awards.
View In Gallery
x