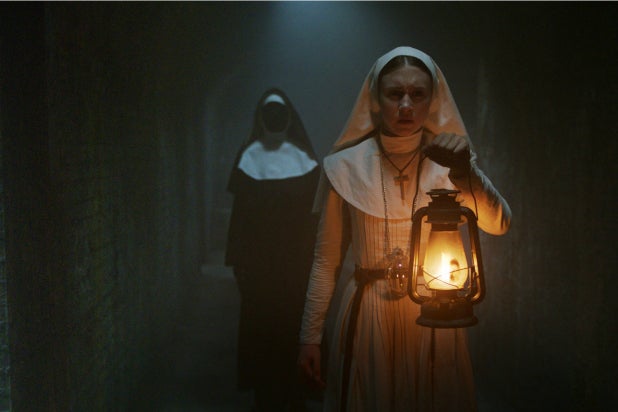 The world of “The Conjuring” has developed in strange directions. Originally inspired by the controversial, debatable, but technically real-life investigations of paranormal investigators Ed and Lorraine Warren, the franchise began with movies that told fictionalized version of allegedly factual hauntings.

But as the series got bigger, so too did the monsters, and now we have films like “The Nun,” which have no relationship whatsoever to reality, in inspiration or even in style. It’s a spooky, entertaining, but totally goofy entry in “The Conjure-verse.”

“The Nun,” directed by Corin Hardy (“The Hallow”), tells the story of Valak, the evil be-habited nun who haunted Lorraine Warren (Vera Farmiga) in “The Conjuring 2.” The prequel takes place decades earlier, in 1952, and tells the story of how Valak escaped from the Abbey of St. Carta, a bombed-out medieval castle in Romania.

The story kicks off when a pair of nuns, in a fit of panic, open a mysterious door. One of the nuns gets sucked into the dark void within, while the other escapes, only to immediately kill herself by flinging her body out of a window with a noose around her neck.

Later, a studly local delivery guy named Frenchie (Jonas Bloquet, “Elle”) stumbles across her gruesome remains. So a miracle-hunter named Father Anthony Burke (Demián Bichir) is assigned by the Vatican to investigate, along with a young novitiate named Irene (Taissa Farmiga), who has psychic visions.

With Frenchie by their side, Burke and Irene venture into the creepy-weepy Abbey of St. Carta, where they discover mysterious, terrified and terrifying nuns, radios that turn on by themselves, and apparitions that remind them of past sins. (And also of snakes, just because.) As they read ancient texts that just happened to be in the place where the demonic nun Valak tried to bury them alive — a pretty major flaw in Valak’s plan — they realize the true nature of the evil that surrounds them, and they do what they need to do to stop Valak once and for all.

“The Nun” is spooky, but it’s never genuinely scary, because it takes place in a reality divorced from our own. Every gothic element is overblown, every “boo” scare is shouted so loud it can break glass (sometimes literally). It feels like it jumped straight out of an EC Comics horror anthology, full of unreal imagery but with none of the trademark ironic moralizing.

Many of the film’s biggest centerpieces are so cartoonishly broad that any rational mind would assume they are supposed to be dream sequences. It would be scary if Burke fell into an open grave, but then the casket closes, the grave instantly fills up, and the letters on the tombstone suddenly read “Father Anthony Burke,” as though the titular nun was trying to impress an unseen audience. That’s not frightening. That’s a Looney Tune.

Only Frenchie seems to understand exactly what kind of movie he’s in. When he flees, panicked, from a horrifying specter, he suddenly notices that the demon didn’t follow him into a graveyard. So he grabs the nearest cross-shaped tombstone and carries it with him for the next 30 percent of the film. It’s hilarious and even a little endearing, especially when he drags it into the nearest old-timey pub to hear the locals do their own, charming local rendition of the skittish townsfolk from the beginning of “Dracula.”

Also Read: 'The Nun' Producer James Wan on His Creation of a Superhero-Like Horror Universe

“The Nun” doesn’t seem to belong in universe of “The Conjuring.” In the previous films, the supernatural horrors befell seemingly normal people, grounding the audience in a semblance of reality before any experts in the occult showed up. It’s scary because it could happen to you. But “The Nun” is about occult adventurers seeking out danger, giving the film a B-movie adventure sensibility that would be charmingly silly, were it not for the repetitive horror sequences which try (and usually fail) to get under your skin.

And yet the obvious twist, that Irene is a young Lorraine, never comes to pass. It’s the most obvious connection in the world, and “The Nun” never makes it. All our familiarity with the “Conjuring” franchise does is distract from the movie, and from Taissa Farmiga’s admirable performance. It’s like watching a DC superhero movie about a superhero who doubles as a mild-mannered reporter named “Mark Kent,” and nobody ever comments on it. “The Nun” is a movie where children puke snakes, and this Irene/Lorraine business is the weirdest thing in it.

But at least it’s never boring. “The Nun” moves at a fast clip, like it’s desperate to get to the next set piece. A little more action and a little less gore, and it could have made a rollicking installment of Universal’s defunct “Dark Universe” franchise, which also tried, but did a worse job of, combining scary stories with comic-book sensibilities.

Instead, we have “The Nun,” an absurd, somewhat inept, but watchable horror mishmash, visually cobbled together from half-remembered Hammer, Amicus and Roger Corman horror movies, with a plot that glues Michael Mann’s “The Keep” and “Tales from the Crypt presents Demon Knight” into some kind of weird Frankenstein monster. And if that sounds like a selling point … maybe it is.