Warning: Do not read any further if you don’t want to read spoilers for Season 2 of “The OA.”

When Netflix released the first season of “The OA” way back in 2016, its big, mind-boggling ending left viewers with far more questions than answers. And more than two years later, Season 2 leaned hard into that same pattern, going even bigger and more mind-boggling.

This time around, Season 1’s philosophical musings about faith and storytelling were replaced with surprising plot twists befitting the season’s more film noir-esque storyline and one unexpectedly meta conclusion.

Many of the questions lingering from Season 1 — Was Prairie’s tale about being held captive real or just a story? Is she actually an angel? — were dispatched within the first 45 minutes of the second season, but by the last five a whole new set of questions had arisen to take their place.

Namely, what the heck just happened?

Co-creators Brit Marling and Zal Batmanglij have said they have a five-season plan for the show, so presumably answers will come. But if the almost two-and-a-half-year wait between seasons 1 and 2 was any indication, Marling and Batmanglij have no qualms about making fans wait. 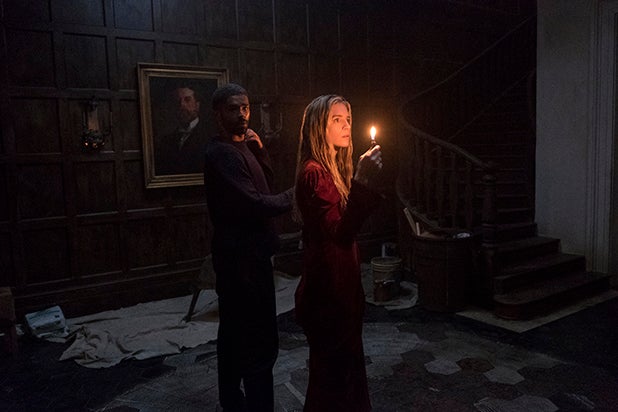 Here are 15 of the biggest questions left unanswered after watching “The OA” Season 2:

Wait– what did I just watch?

In a somehow even more bonkers move than the Season 1 finale, Season 2 ends with Hap (Jason Isaacs) and Prairie (Marling) in a new dimension where they’re actors on a film set taping the what looks to be Season 2 of “The OA.” What?

Did Hap and Prairie/Nina/The OA travel to our dimension?

In this new dimension, Hap identifies himself as “Jason Isaacs” and a woman refers to Prairie as “Brit,” and it’s all very meta and confusing. Are they in our dimension? Or in a dimension that looks like ours but isn’t? Are you real? Am I?

Isaacs and Marling as we know them aren’t married, but at the end of Season 2, “Jason Isaacs” tells a paramedic that “Brit” is his wife. Weird!

Is this third dimension related to Scott’s NDE?

Season 2 appears to take place in the dimension we saw Homer (Emory Cohen) travel to in his near-death experience (NDE) — flooding urinals and creepy pentagonal fish tank and all — so have we seen this new dimension before? In his descriptions of his NDE, Scott (Will Brill) said he was blinded by a bright light and a woman referred to Prairie as a name that sounded like “Brynn.” Film sets have a lot of lights and the name Brit sure sounds a lot like Brynn.

Hap’s research in Season 2 was aimed at targeting his jumps, and right before they left he chomped down on a flower he plucked from Scott’s brain garden, presumably allowing him to focus on that as the destination for his jump. So is that where they ended up? 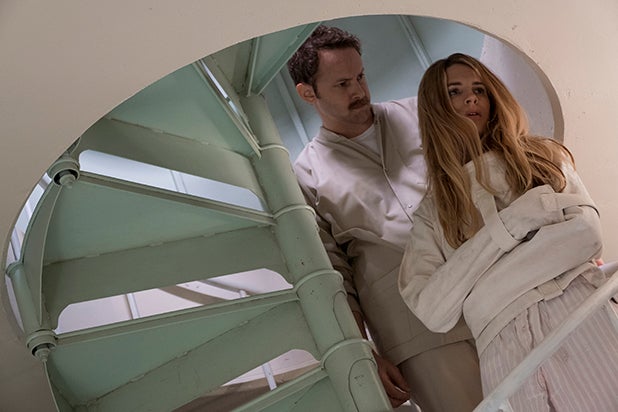 How do the brain gardens work?

In the finale, Hap tells Prairie that the multi-verse exists inside a seed in our brains, and something about being in Nina’s mysterious puzzle house helps that seed sprout into a garden, which itself acts as a map to the many alternate realities.

The house and the brain gardens seem to be references to Jorge Luis Borges’ short story “The Garden of Forking Paths.” In Borges’ story, a Chinese philosopher constructs a novel where all possible outcomes of an event happen simultaneously. The philosopher’s novel itself becomes an infinite labyrinth and puzzle, “in which all men would lose their way.”

In “The OA’s” take on Borges’ vision, Karim (Kingsley Ben-Adir), the detective, solves the metaphorical labyrinth — Pierre Ruskin’s (Vincent Kartheiser) game and the house’s own puzzles — and is able to see across dimensions through the rose window in the attic.

None of that explains, though, why Hap’s first instinct was to eat the flower growing out of some dead guy’s ear.

Have people in this dimension watched Season 1 of “The OA”?

Did they like the ending, or was it as divisive as it was here?

Did Steve (Patrick Gibson) get a new running coach?

He catches the ambulance this time!

Did the others jump too? 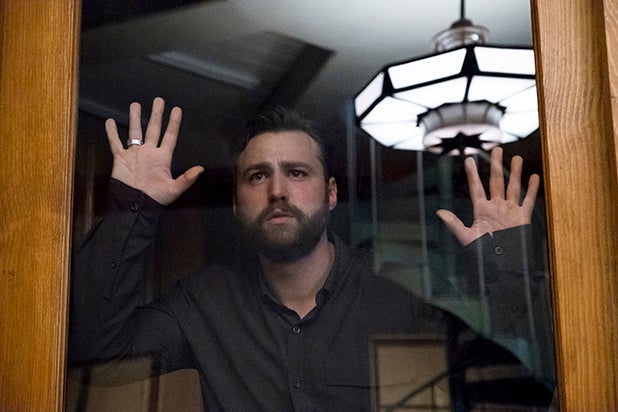 Right before Prairie and Hap made the jump to the third dimension, Hap shot Homer through the chest, leaving a tearful Prairie to beg him to find her in the next world, even if they lose their memory of each other again. But we don’t find out whether or not Homer survived. Did he make the jump to the land of “Brit” and “Jason Isaacs”? And if he did, is he Emory Cohen here? Or is he someone else entirely?

Was Prairie’s fall an act of sabotage?

Prairie’s brief ascension as a glowing angel is interrupted by a rogue dove who causes her to fall from three stories and smash her head. Fans of the show will remember that Prairie received the first movement and regained her sight in her star-spangled NDE after she swallowed a white bird. Could it have been the same bird, back from the dead and out for blood?

Who was that French lady?

Season 2 introduced the idea that there are others besides Hap and Prairie traveling the multi-verse, with the new mysterious character Elodie (Irène Jacob) popping up at key points to cryptically explain the process of hopping from one reality to another. She describes herself to Prairie as “a guide,” but we don’t know much else about her backstory. Where did she come from? What is her connection to Hap and Prairie? How did she learn to jump?

Where did the dancing robots come from?

In one of “The OA’s” more amusing surprises, Elodie possesses a set of dancing robots, which automatically perform the movements that allow her to travel between dimensions. Who invented these robots? How does she get her hands on a new set every time she travels to a new dimension? Are they really powered by sex, as she seems to tell Hap? 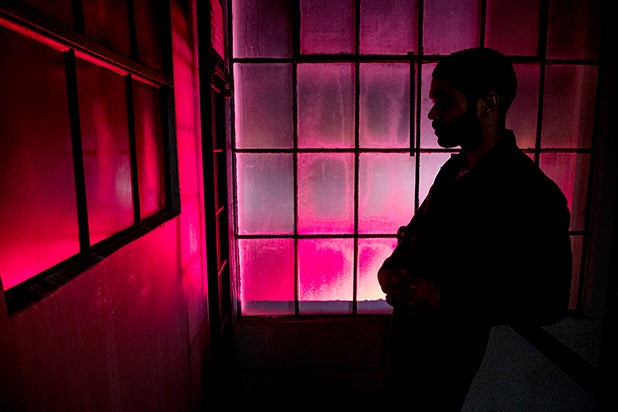 So, about that giant octopus…

As she slips into Nina’s life, Prairie discovers that she used to do a show at a nightclub called Syzygy that somehow involves her communicating psychically with a giant octopus. He goes by Old Night publicly, but he tells Prairie — who we later discover can communicate with all living creatures — that his name is Azrael. (Traditionally, Azrael is the Angel of Death, responsible for collecting souls from people’s bodies and guiding them to the afterlife.)

Old Night kills Prairie on stage for 37 seconds, giving her a brief glimpse into another dimension, which appears to be the same as the one she travels to at the end of the season.

But where did Old Night come from? How did he end up getting roped into a nightclub show with Nina? Was the show just him killing her on stage every night? How does he know about Prairie and the OA? Sadly, Karim was forced to kill Old Night to save Prairie’s life, so we may never get a full explanation.

What’s the deal with Riz Ahmed?

A big question at the end of Season 1 was the true nature of Riz Ahmed’s FBI psychologist character Elias Rahim. Was he a real FBI agent? Was he helping Prairie or working against her? Could he be trusted?

Ahmed makes a brief reappearance in Season 2, in which none of those questions are addressed. If anything, it gets more confusing. Back in the show’s original dimension, French (Brandon Perea) calls on Elias for help when the kids are on the run. But instead of turning them in, Elias asks a bunch of cryptic questions and seems to intimate at least some knowledge about the multi-verse.

He helps teach BBA how to sense people across dimensions and explains that his goal is to assist Prairie in her journey as the OA because he knows “she’s going to need it.” Who is this guy?

What’s the deal with Vincent Kartheiser?

One of the main antagonists in Season 2 is the tech mogul Pierre Ruskin, played by “Mad Men” alum Vincent Kartheiser. It’s his desire to solve the puzzle of Nina’s house and reach the rose window which ends up exposing a bunch of kids to poison gas and leading to the disappearance of Michelle.

One could certainly draw comparisons between him and Hap — both powerful, single-minded obsessives trying to uncover the mysteries of the multi-verse at the expense of young lives — but will we see more of him in the future? Is he a bit player or someone who could be important down the line? He was Nina’s boyfriend and business partner in the second dimension, so does he have connections to her in other realities as well? 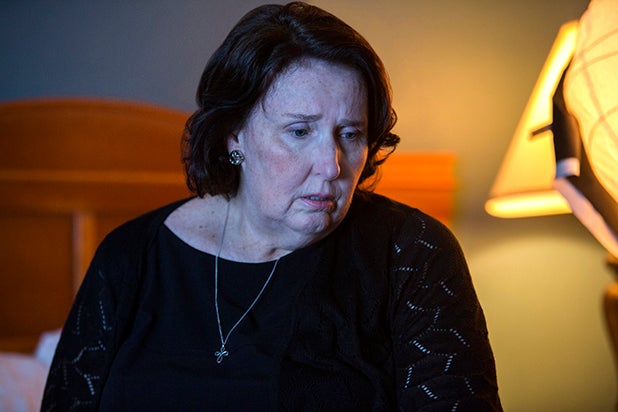