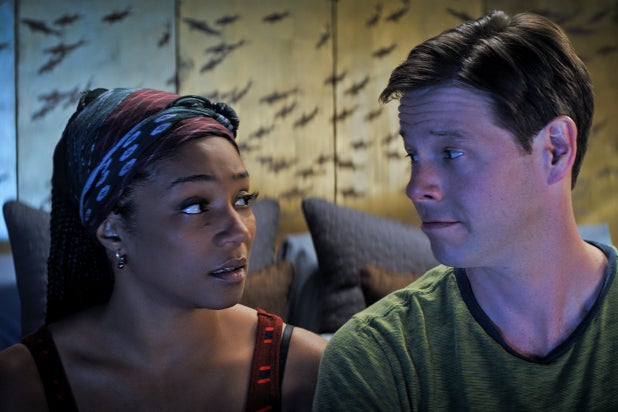 The year is 2018, and it’s an interesting time to watch dystopian movies. Many films that seemed naive or implausible just a couple of years ago now appear, depending on your politics, to be just one step removed from actual American reality. And it’s creating an uncanny valley effect, where the real world looks so much like a far-fetched sci-fi parable that it’s hard to believe what’s actually happening right in front of our eyes.

Writer-director Ike Barinholtz’s “The Oath” is one of the first films to react to this phenomenon, cataloguing a very near future in which Americans are expected to sign a loyalty oath to the President of the United States, or risk violent retribution from their neighbors, persecution by a new division of Homeland Security, or at least going without a hefty tax credit. It’s a disturbing concept, but if it happened tomorrow, it wouldn’t the biggest surprise ever. (Heck, a lot of people would probably support it.)

“The Oath” stars Barinholtz and Tiffany Haddish as Chris and Kai, a married suburban couple raising a young daughter, who promise not to let the political strife tearing apart our nation change them. But that was the beginning of the year, and now the deadline for signing the oath is fast approaching. Citizens have until Black Friday to pledge their allegiance to POTUS, and Chris still hasn’t done it, and he’s judgmental about everyone who has, including his own family, who are all coming to visit.

The film takes place almost entirely over Thanksgiving weekend, where Chris and Kai are hosting Chris’s siblings and parents, all of whom are more conservative than he is in varying degrees. It’s already a heated holiday, the kind where everyone practically signs an oath anyway, if only to “not talk about politics.” But with America literally just days away from becoming a fascist state, with the government opening fire on peaceful protesters, with angry citizens slashing each other’s tires and yelling “Get out of my country!”, and with voices of dissent getting arrested and disappeared, the whole gathering is destined to be awkward as hell.

And, unfortunately, it’s also going to get violent. When someone calls an anonymous tip line, ratting out Chris’s “un-American” sentiments to the Citizen’s Protection Unit, a new division of Homeland Security, agents Peter (John Cho) and Mason (Billy Magnussen) respond to the call. It’s everything Chris has always feared, and it’s in his house, and the situation escalates quickly. Soon there are people tied to chairs and impossible decisions to make.

“The Oath” is a story about liberal fears becoming desperate realities. Chris talks a big game about standing up to the government, about not letting fascism rise in “his” America, but although he’s participated in a few protests, he mostly just checks his phone every few minutes for news updates and announces his moral superiority. If the world actually goes to hell, which it does, he’s not really prepared for it. His careless attempts to put principles over pragmatism just make a bad situation worse.

Barinholtz’s film excels at recreating the simmering, day-to-day panic of contemporary American life. “The Oath” treats the constant, depressing news updates we get every day like the radio announcements in a slasher movie, warning hapless teens that a serial killer is on the loose at Make Out Point. Ignore the exposition at your peril, Barinholtz warns, and in the first half of the film, the effect is subtly chilling. Everyone is just going about their business when the whole country heads down a slippery slope, and you desperately want them all to do something about it.

But the closer “The Oath” gets to making a salient point about that state of affairs, the more it frustratingly shies away. Barinholtz’s capable cast makes the most out of a closed-room environment, where tensions flare and bad decisions escalate into life-changing panic. But the film struggles to find a satisfying conclusion to such an interesting set-up, and the disappointing finale Barinholtz settles on has the annoying effect of muting the film’s arguments.

By the end of “The Oath,” it’s genuinely hard to tell where Barinholtz stands on the issues he raises. Does he want his audience to keep fighting the good fight? Does he want us to set global politics aside and focus on healing the divides within our families? Should we all just go to the Winchester, have a nice cold pint, and wait for all this to blow over?

“The Oath” is a film of its time, and that immediacy is both its strength and its downfall. Barinholtz excels at capturing contemporary anxieties and exploring how politics taints personal relationships. The daily struggle between principle and pragmatism is a topic that warrants exploration, and for a while, that’s what “The Oath” offers. In the future, we may point to the first half of this film and tell our kids, “Yup, that’s exactly what it was like.”

But without the context we’ll have in that future, without knowing where all these warning signs are actually taking us, “The Oath” is forced to just take a guess at a finale. Maybe we’ll discover that Barinholtz’s film was prescient in its closing remarks, but today, in the heat of the moment, it feels like the film raises important questions but loses its nerve before it gets to any answers.