It’s the 1970s in Los Angeles and some shady studio guys are trying to get a movie made. But some dangerous criminals are rather put off by the concept and would like it not to happen. Will they manage to work things out? That’s question posed by the trailer for the upcoming Paramount+ miniseries “The Offer,” which you can watch now.

Of course, by now you know the movie in question was “The Godfather” and that this show is based on things that actually happened, so of course they managed to work it out. The how of that is the focus of the 10-episode event, however. Expect to see a lot of 1970s Los Angeles sleaze, 1970s New York grime, and plenty of that Hollywood magic, baby. Also, since Robert Evans is a character, probably lots of cocaine. 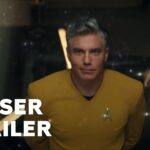 In addition to the trailer, enjoy the highly evocative-of-the-actual-film poster below: