Contemporary American horror, when it’s bored with itself, likes to vacation in foreign lands, if only to luxuriate in the deaths of pampered white people dropped into places not built for them (see: “The Ruins,” “The Green Inferno”). In more thoughtful hands, these deaths are a metaphor for political anxieties, for fear of the “other.” In “The Other Side of The Door,” it’s just death.

Michael (Jeremy Sisto, “Six Feet Under”) and Maria (Sarah Wayne Callies, “The Walking Dead”) spend an idyllic lovers’ vacation in a tourist-approved part of India. She announces her pregnancy, and faster than you can say “economic privilege,” they decide to pull up stakes and move there, shifting the home base of their growing antiques business to the country from which they export the most product. Six years later, they live in a sprawling, beautiful home set comfortably away from poverty and population density, tending to their work and to their young daughter.

But there was another child, a son, who died in a car accident, and his loss fills Maria’s days with malaise and her sleep with nightmares. That’s when Maria’s helpful housekeeper Piki (Suchitra Pillai-Malik) tells her of a distant temple that houses the souls of the dead. All Maria has to do is go there, knock on its locked door, and she can speak to the spirit of her lost child. Couple of warnings, though: you can’t open the temple door no matter how much your favorite ghost begs you to do so, and the whole place is guarded by a reclusive group of ash-covered temple-dwellers dressed like walking ghouls, whose favorite pastime is sneaking up on people and making noise.

Not surprisingly, the remainder of this dull, uninspired, and often culturally tone-deaf thriller from writer-director Johannes Roberts (“Storage 24”) and co-writer Ernest Riera involves exactly the sort of trespassing about which its characters were warned. Consequently, there is “Conjuring”-style haunting. There’s a creepy piano that plays itself. And there is an annoyingly liberal use of horror’s cheapest gimmick, the jump-scare. The house becomes a minefield of spooky occurrences, none of which add up to much, even when Maria adopts a potentially surprising attitude toward her ghostly predicament. 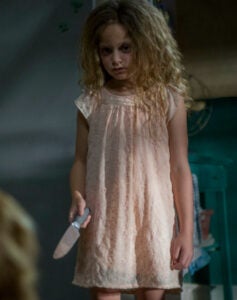 The setup is ripe for deeper reads, both as a dive into the raw grief of parents who lose a child, and – less likely, still worthwhile — one in which the sins of India’s brutally exploited past come to visit the present and wreak fitting vengeance. David Bryan’s production design provides a proper setting for the film to move in either direction, a location both lush and difficult to navigate, tranquility and torment butting up against each other.

Location in this under-considered narrative, whether physical or emotional, points more toward Indian production investment rather than any nuanced sense of psychology, place or history. And though Callies works to invest her conflicted character with meaning that the script and direction only half-provide, her performance is lost in the bumpy darkness.

The filmmakers are more concerned with shock-cuts, loud bangs, and creating Indian characters that are either servants or monsters, than with pushing the genre forward into satisfyingly visceral or psychological territory. The opportunity to make a powerful, relevant horror film was knocking, and nobody answered.