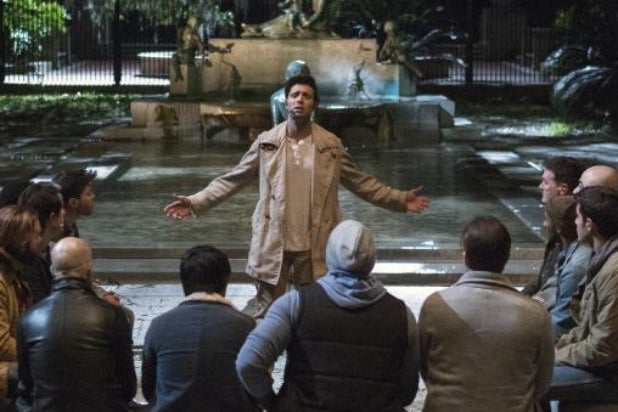 Executive Producer Mark Bracco is passionate about “The Passion,” but even he knows something will probably go wrong during Fox’s ambitious live musical event.

“You just never know,” he told TheWrap. “Are the odds that something is going to go wrong at some point? Yeah, pretty much.”

While the odds are always against pulling off a perfect live broadcast, it seems extra likely that a hiccup could come from Bracco’s 20-foot, 284.87-pound cross and 1,000-person procession through the streets of New Orleans. After all, not every road will be closed this weekend, and the gang has only even practiced it once thus far, coming across a little trouble in the French Quarter.

And no, that wasn’t because too many people drank too many hurricanes — it’s simply that the corners in the old part of an old city are just too tight. Still, the group carrying the crucifix made its crucial timestamps — but it was close.

On Sunday, “It could stop for a few minutes,” Bracco admitted. After all, if a fire truck — for example — has to get by, it has to get by. Because event-TV programming isn’t actually life or death, it just feels like it.

The gang practiced the trek once more on Friday, again on Saturday, and has one final run-through scheduled during a dress rehearsal today. So when it’s “go” time for real, it’ll be only the fifth time that volunteers will have made the march.

Still, Bracco & Co. feel prepared. After all, this isn’t Productions’ first live television event, nor is it even the first run of “The Passion.”

The special hails from The Netherlands, where it’s the biggest entertainment event of the year, every year. Over there, 2016 will mark the show’s sixth run, with each spring having grown larger in ratings/share than the last. Producers use the same biblical story each time around, but cast different actors, songs and cities.

That’s exactly what Bracco and Fox hope happens here, should they have a hit on their hands.

And they just might have one come Monday morning, as Nielsen ratings are literally a numbers game. In this one, fortune favors the religious.

“For the tens of millions of Christians in America, I think it’s something that will attract them,” Bracco told us. That would more than do it, as “Grease: Live” was considered a smash with 12.2 million live total viewers.

Of course, with such a standard set both abroad and domestically comes great expectations. Critically, “Grease” provided quite a high benchmark for Dana Walden and Gary Newman’s airwaves as well.

Bracco’s been able to use “Grease” and what he called NBC’s “amazing” musical offerings as another learning experience. The Fox predecessor in particular taught him a lesson that he hopes to emulate with “The Passion.”

“What was so great about ‘Grease: Live’ is the way that it really was so different, in that it broke the fourth wall,” Bracco told us, “it made it feel so participatory.”

That’s why he’s so big on Tyler Perry as narrator — a role Bracco called “vitally important” — and also live on-camera interviews of cross-carrying volunteers whom Bracco plans to employ.

Perry is not only a New Orleans native, but he’s a religious man, something that Bracco was very open about in the casting process.

But the producer swears his Palm Sunday offering isn’t just for Catholic viewers: “Even if you are not a believer in this story, it’s two hours of fantastic music,” he told us of a show that includes tunes from Katy Perry, Tina Turner and Imagine Dragons, to name a few. “You’ll know every single song.”

“The Passion” airs live Sunday night at 8/7c on Fox.